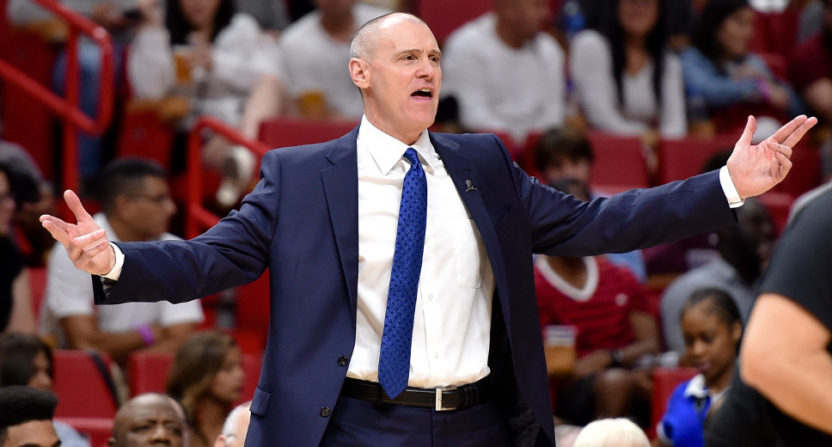 There have been some interesting flare-ups over NBA credentials and interviews over the years, from Mark Cuban pulling ESPN reporters’ credentials over automated stories to coaches protesting in-game interviews to the Los Angeles Lakers preventing media from interviewing people in the friends and family area under “The LaVar Ball Rule.”

The latest story involves all of those three elements, with Dallas Mavericks’ coach Rick Carlisle ranting Sunday about a recent ESPN story where LaVar Ball (father of Lakers’ rookie point guard Lonzo Ball) criticized Lakers’ coach Luke Walton and saying ESPN should “back up the coaches.”

Beyond his role with the Mavericks, Carlisle is also the president of the NBA Coaches’ Association, so his words could have quite an impact, and Sam Amico of Amico Hoops is already reporting that some coaches plan to try and pull credentials from writers who interview Ball:

And the key comments, as transcribed by Tom Schad of USA Today:

Carlisle referred to the article as “a disgrace” and strongly defended Walton, calling him “a terrific young coach.” Then, he dug into ESPN.

“ESPN is an NBA partner, and they’ve been a great one,” Carlisle told reporters. “But part of that partnership is that the coaches do a lot of things to help them with access, interviews and all those kinds of things. And in exchange for that, they should back up the coaches.

“Printing an article where the father of an NBA player has an opinion, that’s printed as anything like legitimate, erodes trust. It erodes the trust that we’ve built with ESPN, and our coaches are upset because Luke Walton does not deserve that. Two years ago, he took a veteran team and led them to 24 wins in a row, which is an amazing accomplishment. And off of that, he earned the Laker job. To have to deal with these kinds of ignorant distractions is deplorable.”

Carlisle was then asked if he was saying that ESPN should only publish stories that coaches would approve.

“I’m saying that they should look at their sources and do a better job of determining whether they have any merit or any validity, or are they just blowhard loudmouths. That’s what I’m saying,” Carlisle replied.

Carlisle certainly isn’t alone in his opinion that LaVar Ball is a “blowhard loudmouth,” and he’s also correct that journalists shouldn’t necessarily just publish everything they hear. And that’s particularly true when it comes to Ball, given his history of outrageous claims. This is the guy who said that he could beat Michael Jordan one-on-one (despite his own basketball career highlight being one season at Washington State where he averaged 2.2 points per game) and that Lonzo “is going to be better than Steph Curry.”

Media organizations don’t necessarily have to keep giving Ball a forum to say crazy things, and it can be problematic when they do.

However, Carlisle is flat-out wrong that “in exchange for [ESPN’s access], they should back up the coaches.” ESPN gets that access thanks to the terms of the giant rights fees they’re paying the NBA, which is part of why coaches like Carlisle make a lot of money (in his case, reportedly about $35 million over five years). It shouldn’t come with any obligation to provide favorable coverage to the league as a whole, to its coaches as a whole, or to any individual coach, and if there was any indication that ESPN reporters were less critical of the league or coaches thanks to that deal, we’d wind up with another ESPN business/journalism controversy.

There haven’t been many of those on the NBA side over the years, which suggests that the network’s basketball reporters are doing a good job.

Beyond that, there’s an argument for the validity of that ESPN piece, and it’s a better argument if you remove “LaVar Ball” and all the connotations associated with him. It’s not all that uncommon to see news stories with professional athletes‘ wives, significant others, or family members weighing in, and the rationale is often that the athlete they’re connected to may share some of those sentiments. And “Lakers’ player’s father says Luke Walton ‘doesn’t have control of the team no more. They don’t want to play for him‘” feels like a story.

It’s probably more of a story if those comments come from a father who doesn’t have a reputation for saying whatever will get the most attention, but there’s still some notability even with it being Ball. He certainly appears to have at least some influence on his sons, including Lonzo, and if this is an indication of rising tensions between the Lakers’ coach and their 2017 second-overall pick, that could have some notable consequences.

Yes, these comments are ridiculous, both when it comes to Walton and when it comes to “LeBron’s coming to LA,” but the Walton comments at least could have some relevance. It doesn’t matter how good of a job Walton is in fact doing; if LaVar is able to convince Lonzo Walton is terrible, then that causes problems for the Lakers and creates a situation for the wider NBA.

And what does Carlisle’s counterargument of “don’t report it” accomplish? If ESPN’s Jeff Goodman hears LaVar Ball say that and doesn’t write about it, that means any tensions between Lonzo and Walton aren’t in the public eye right now, only showing up if something happens later. It doesn’t eliminate Ball’s criticism of Walton, it doesn’t prevent him from making those criticisms to Lonzo, and it doesn’t make everything healthy with the Lakers. It only means that tension takes place more quietly and that fans aren’t informed of it.

Goodman is doing his job by informing fans of this. And in reality, the “solve problems internally argument” isn’t going to happen. If that’s the message Ball wants to get out there, and if Goodman doesn’t want to publish it, Ball will just call up a different reporter. There’s no way the entire media is going to stop publishing LaVar Ball’s comments.

This gets really ridiculous when you move on to the Amico report of other NBA coaches planning to ask their media staffers to pull credentials for reporters who have interviewed LaVar Ball. Is every piece about Ball noteworthy? Probably not, but that doesn’t create a valid reason to pull credentials, and it won’t accomplish anything. In particular, this is an odd tack to take in response to a piece by Goodman, who mostly covers NCAA basketball for ESPN and thus wouldn’t be affected by any NBA credential pull.

It’s punishing a bunch of reporters who weren’t involved for other pieces they wrote about Ball that didn’t create a problem at the time. And it makes the NBA coaches look ridiculously thin-skinned. They’re in an extremely public profession that involves taking a lot of criticism, and they’re very well-compensated for that. All of a sudden, they’re so worried about what LaVar says that they want to pull reporters’ credentials?

Should media be careful with what platforms they provide LaVar Ball and what assertions they let him make? Absolutely. Anything on Ball should include plenty of context on his past ridiculous claims and of his meddling in his sons’ teams (Goodman’s piece has lots of the latter, at least), and media outlets shouldn’t regularly have LaVar on-air as a guest (a trend that’s fortunately diminished in recent months, apart from CNN) or regularly give him a forum to say ridiculous things with no news value.

But LaVar blasting Walton is notable, not because LaVar is any sort of basketball authority (he isn’t), but because it could be indicative of Lonzo’s relationship with his coach. And there’s a good case for Goodman and ESPN to publish those comments, and not much of a case for Carlisle and the other coaches to get mad about it and especially to try and retaliate by pulling credentials. This is a rare story involving LaVar Ball where he isn’t the person who looks the silliest in it.