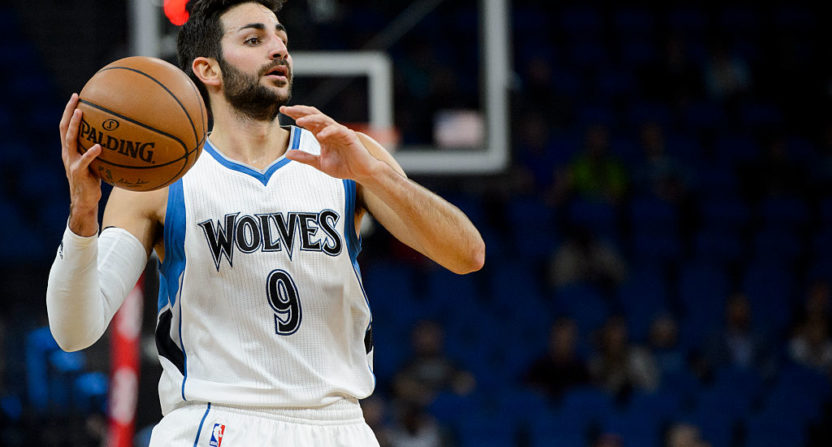 The Jazz landed a new point guard in Ricky Rubio on Friday. No matter what you think of Rubio’s skills, the acquisition has bad implications for what Utah fans really want: keeping star wing Gordon Hayward in free agency.

With the Jazz shipping away a 2018 first-round draft pick to get Rubio, that strongly suggests they don’t expect to retain veteran point guard George Hill, another free agent. And Hayward’s decision in free agency appears to hinge on Hill staying in Utah.

Another source confirms that Gordon Hayward really wants the Utah Jazz to bring back George Hill. His decision could hinge on that.

Maybe Rubio, a pass-first point guard, is an attractive get for Hayward. But if the reports of his desire to play with Hill were accurate, Rubio might not be enough.

Meanwhile, the Timberwolves are left with a hole at point guard that they will need to fill in free agency. Prior to trading Rubio, they also traded Kris Dunn and Zach LaVine. No offense to Tyus Jones, but I doubt the Wolves are trying to to start a 21-year-old with career averages of 3.8 points and 2.7 assists right after acquiring Jimmy Butler from the Bulls in an attempt to become one of the West’s top teams.

With extra cap room freed up by dealing Rubio, the Wolves can make a run at one of the top available point guards. Their guy could be Kyle Lowry, or maybe Jeff Teague, or even the aforementioned George Hill.

But possibly, Minnesota’s answer could be Rajon Rondo, who was released by the Bulls on Friday. Like Rubio, he’s a skilled floor general and a veteran presence. And as we saw in the 2017 playoffs, when Rondo comes to play he can still be a deadly point guard for opposing defenses, even at 31 years old. Plus, he’s familiar with Minnesota coach Tom Thibodeau from when Thibs was an assistant in Boston.

The Wolves have a terrific young duo in Karl-Anthony Towns and Andrew Wiggins. One glaring issue on their roster last year was the lack of veteran presence. They started addressing that by adding Butler, another player who’s played in Thibs system before. Not only are Rondo and Thibodeau familiar with each other, but he would also be a cheaper option. Meanwhile, a top free agent like Lowry or Teague will be asking for an expensive, long-term deal.

The bottom line is this was a great deal for the Timberwolves. (And a good one for the Jazz as well if they’re confident about Hill leaving.) For Minnesota, they could potentially upgrade with a veteran point guard and get an additional first round pick out of it.