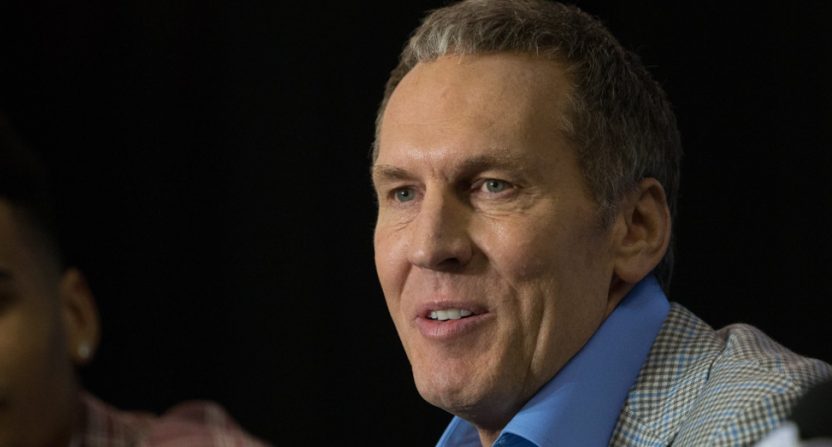 Anonymous or fake social media accounts run by prominent people to try and influence discussion about them are a growing topic of discussion in many circles, but a lot of the sports examples of that so far have been more funny than problematic. (See Kevin Durant’s burner account.) When it’s a sports executive trying to influence the conversation about that executive and his team under false pretenses, though, and even suggesting certain medical issues about particular players and lobbing strong insults at his team’s coach and players, it’s a whole lot more troubling. And there’s a growing body of evidence suggesting Philadelphia 76ers GM Bryan Colangelo has done just that, thanks to an investigation by Ben Detrick that was published at The Ringer Tuesday night.

That piece is worth reading in full for its discussion of how this started (an anonymous tip purportedly based off data analysis tracking similarities in follows and activity across a whole lot of accounts), its analysis of the behavior across these five accounts that suggests Colangelo was in fact behind them (from follows to interactions), and its note about how the Sixers and Colangelo responded to an initial request for comment on two of the accounts (Colangelo confirmed owning one that has never tweeted and denied another, but the three accounts he wasn’t asked about then all switched to private, with at least  one going on an unfollowing spree as well.) When asked about the similarities between the accounts, Colangelo responded with a statement:

Like many of my colleagues in sports, I have used social media as a means to keep up with the news. While I have never posted anything whatsoever on social media, I have used the @Phila1234567 Twitter account referenced in this story to monitor our industry and other current events. This storyline is disturbing to me on many levels, as I am not familiar with any of the other accounts that have been brought to my attention, nor do I know who is behind them or what their motives may be in using them.

But these accounts display behavior (particularly in who they follow, ranging from Colangelo’s son’s teammates and high school coach to a guy who runs a company Colangelo invested in to people he knew socially in Toronto) that definitely seems more probable as coming from Colangelo (or someone closely associated with him) than anyone else. And bizarrely, they’ve sent a lot of tweets that seem quite easy to link to Colangelo, such as one about the Sixers’ minor-league affiliate on a night he was in attendance and interviewed on their broadcast, or one to Gabrielle Union about sitting by her and Dwyane Wade at the Beijing Olympics (Colangelo was there) But much of these accounts’ behavior is incredibly reckless for an NBA executive. These tweets have bashed former GM Sam Hinkie and media praise for him, but they’ve also bashed players still on the Sixers roster at the time, as well as coach Brett Brown. And perhaps most problematically, they’ve appeared to divulge unreported medical information about Sixers’ players, and pushed journalists to ask about it:

On February 12, while Okafor was home in Philadelphia as the team traveled, a writer for the blog The Sixers Sense named Brian Jacobs posted a highlight from then-Pistons guard Kentavious Caldwell-Pope. Eric jr replied, seemingly off topic, “I must be nuts, I cannot sleep because I worry Jah will not pass physical exams and sent back.” The next day, Jacobs posted a prospective trade that would ship Okafor to the Pelicans for E’Twaun Moore and a pick. Eric jr responded again. “I feel it in my bones, deal was done and Jah did not pass physical,” the account wrote. “Let’s wait & see, only possibility at this point.”

When Okafor rejoined the Sixers in Boston on February 15, Colangelo was criticized for creating an embarrassing situation for the second-year center. From that point onward, Eric jr (and other accounts) consistently claimed, dozens of times, that a deadline deal involving Okafor was derailed by a failed physical. A source tangential to the prospective trade told me that he wasn’t sure why the transaction never went through, but necessary paperwork had been drawn up and “the expectation was that the trade would be completed.”

Most of the tweets were directed toward basketball journalists and often tried to goad them into investigating the otherwise unreported allegation. “Ask Jah If he passed other team physical?” Eric jr tweeted at Keith Pompey, a Sixers beat writer for Philly.com. “I bet the farm it’s what’s happened.” The account made a similar suggestion to Jacobs. “Ask Jah If this is the truth? … You are a pretty established writer/blogger. Ask team for interview.”

In some ways, this is a new spin on an old tradition. Executives and coaches have often leaked information that makes them look good and their predecessors or competitors look bad to the media, which is a whole massive problem with some uses of anonymous sources. (And it extends to sports media coverage, not just sports coverage.) But this is problematic in ways even beyond those cases, as at least anonymously-sourced information is provided to journalists by someone they know, and they can then exercise a gatekeeping function to determine if it’s self-serving, or if it should be passed on. (Journalists don’t always do this well, but that’s another issue.)

But these allegations of operating these Twitter accounts are even more problematic than that, as the information being sent out here is being sent under false pretenses (if it is Colangelo running them), trying to change the narrative about him or about certain players without revealing his connection to the story. On some fronts, that’s easy to laugh off (such as a tweet defending his collars), but that’s more serious when it comes to things like medical data or slams against players or coaches in the organization. This certainly did get Twitter talking, though, including Sixers’ player Joel Embiid:

Sixers All-Star center Joel Embiid tells ESPN on Bryan Colangelo: “I talked to him and he said that he didn’t say that. He called me just to deny the story. Gotta believe him until proven otherwise. If true though, that would be really bad.”

You need two blue checks to confirm you are not a burner https://t.co/eZPp2KZ3hg

It’s unclear that any of these tweets had any effect, given that they came from low-follower count accounts that behaved a lot like many trolls and that most media didn’t seem to take them seriously. But the intent to alter coverage or leak damaging info about particular players would be bad enough in its own right if these tweets were from Colangelo, and that would have the potential to alter how the rest of the organization interacts with him. And this story leaves a whole lot of questions for Colangelo and the Sixers to answer.

4 thoughts on “After Ringer investigation, Bryan Colangelo admits one secret Twitter account, but is accused of running others that leaked medical info”