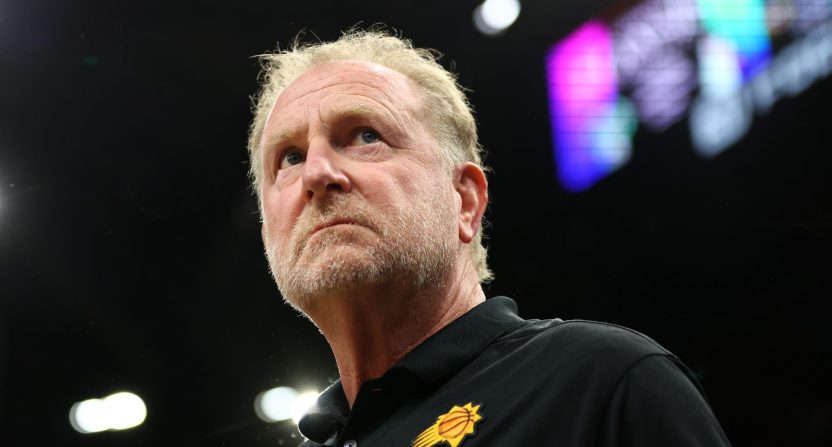 If Adam Silver ruled with absolute authority, Phoenix Suns owner Robert Sarver might be gone. Forced to sell his team and be forever banished from the NBA. But Silver is not Kenesaw Mountain Landis. He’s not David Stern.

Stern, Silver’s predecessor, was perhaps the last truly powerful sports commissioner, and we’re never going to see the likes of him again. Acting in the best interests of the sport comes with a caveat. Silver must answer to 30 bosses, and that includes Sarver. And nothing, absolutely nothing, gets done without the overwhelming majority approval of the owners.

The alarming and embarrassing details that led to Sarver being hit with a year-long suspension and $10 million fine highlight the limitations of the power of sports commissioners. This is a relatively light punishment for someone accused of making “racially insensitive language” and “sex-related comments towards women.” As expected, there was plenty of anger directed at Silver, who said, “The conduct is indefensible but I feel like we dealt with it in a fair manner.”

Fans and media focus so much on sports commissioners. But the truth is without the backing of the owners, there’s often very little they can do. There’s a reason why guys like Sarver and Washington Commanders owner Dan Snyder still have their franchises. Not enough of their fellow owners are demanding change. It’s that simple.

The job of sports commissioners is to provide leadership, direction, and growth. That includes negotiating deals with business partners, such as television networks. For their work, they are richly compensated. But they also serve as spokespeople for their leagues. It’s their responsibility to be the public face of their sport, answering tough questions from the media while the owners operate behind the scenes.

Every fan can name the commissioners of the four major sports (NFL, NBA, MLB, and NHL). Many would struggle to name 10 owners in each one of those leagues. That’s the way oligarchs prefer it. It’s easier to scream at Roger Goodell, Silver, Rob Manfred, and Gary Bettman when things go wrong.

But sometimes that’s equivalent to shaking an angry fist at a cloud.

The days of Landis and Stern are long gone. Owners will never give that much authority to one man again. Instead, all a commissioner can do is provide guidance and try to build a consensus. Sterling and former Carolina Panthers owner Jerry Richardson were forced out because enough owners decided that having them as members of their exclusive clubs wasn’t worth the headache.

However, expulsion is a final resort. None of these owners are quick to kick out one of their own. Why? Probably due to fear that it could someday happen to them. When the NBA ousted Sterling, Dallas Mavericks owner Mark Cuban warned of a ‘slippery slope.’

Plus, there are legal ramifications to consider. The last thing any business wants is to open itself up to discovery and depositions. As bad as what Sarver said was, who knows what other owners may have written in emails, sent in texts, or said on audio or video. The potential for more problems that could cause further embarrassment —or worse— is real (Sterling did sue the NBA, but reached a settlement).

There is, of course, a tipping point. But the owners have so far made it clear that the acts of Sarver or Snyder haven’t reached that threshold yet. And if it does, the ultimate punishment of being kicked out of their leagues will be softened by huge profits.

According to Forbes, the Suns are worth $1.8 billion, and the Commanders $5.6 billion. Sarver purchased Phoenix for $401 million. Snyder bought Washington for $800 million. Sterling, who acquired the then-San Diego Clippers for $13.5 million in 1981, sold the L.A. Clippers for $2 billion in 2014.

Those are staggering numbers.

Wealthy, powerful men are not going to be pushed around by one person, especially not someone who works for them. There’s only so much sports commissioners can do. Fans and media need to direct their anger at those who have the power.