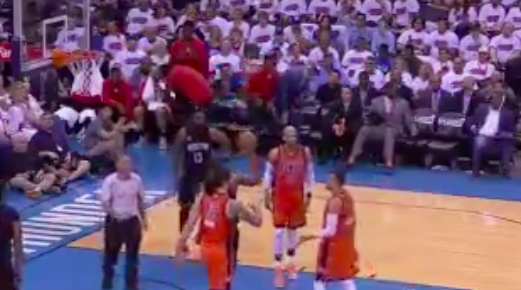 The Houston Rockets defeated the Oklahoma City Thunder in Game 4 to take a demanding 3-1 series lead in their first round playoff matchup. With the two leading MVP candidates, James Harden and Russell Westbrook, trading otherworldly statlines back and forth, the biggest story of the series may be the free throw shooting of Thunder guard Andre Roberson.

Roberson is the latest player to fall victim to the Hack-a-Shaq strategy and to Mike D’Antoni’s credit, it was instrumental in helping the Rockets Game 4.

With Roberson being just a 42% FT shooter on the season, he’s a good target for this kind of strategy. And even though he’s a huge liability with his free throw shooting, his defense is needed on the other end of the floor against Harden and the high powered Rockets attack.

But what everyone will be talking about is not just Roberson’s missed free throws, but the Rockets bench openly laughing at his struggles at the line.

The Rockets bench laughing at Roberson at the free throw line gotta be some of the biggest disrespect ive ever seen in the NBA pic.twitter.com/KkzPKKK0jb

Did the Rockets cross a line of professional decorum and decency by laughing at Roberson’s struggles? That’s fair to say. Nobody (at least outside Houston) wants to see someone have a mental breakdown like that in front of the whole world and be singled out for costing their team the game. It’s like watching a big league pitcher not being able to suddenly throw the ball across home plate or a professional golfer getting the yips and not being able to make a three foot putt. It’s gut-wrenching to watch. The amazing thing is that Roberson is shooting 59% from the field and 50% from downtown in the series but a shocking 11.8% from the free throw line.

You would think that as professional basketball players, as difficult as the situation is, that there might be some empathy for Roberson, even from the opposition. At some point there has to be a line of respect for Roberson as an NBA player and a person, right? None of those players would surely want to be put in that same situation.

But at the same time… this is the NBA Playoffs. There’s no love lost between these teams and you’re willing to do anything and everything to win basketball games. If Roberson can’t make his free throws as an NBA player, that’s his problem. If Billy Donovan chooses to leave him on the floor and risk the Hack-a-Shaq working, that’s his problem. (Just as it’s his problem if he feels like he has to take Roberson off the floor and hurt his defense to avoid him getting embarrassed.)

@AllanInThePost @thebolt17 @Investor4201 @World_Wide_Wob My goal is to win. And while Im injured Im still gonna try to affect the game and get in guys heads. Game is as much mental as physical.

These guys are all adults getting paid millions of dollars to play a game and all bets are off in the playoffs when it’s win or go home. It wouldn’t be a surprise to see the Rockets foul Roberson immediately in the first quarter in Game 5 to get in his head from the start.

Is it uncomfortable to watch? Yes. Is it disrespectful? Yes. Is it crossing the lines of professionalism and decency? Probably, yes. You just have to answer for yourself whether it’s worth going that far and that deep in the mind games department to win in the playoffs.