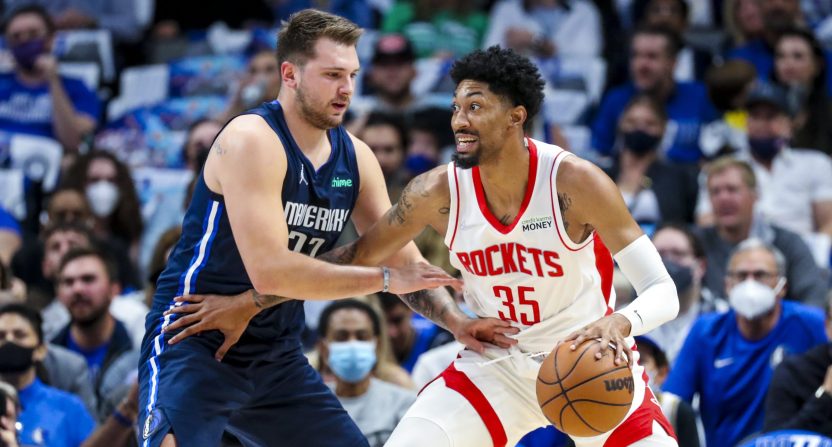 With the NBA Draft around the corner, the Houston Rockets and Dallas Mavericks have agreed to a trade involving a first-round pick, Christian Wood, and a host of other players.

Adrian Wojnarowski of ESPN reported on Wednesday that the Rockets are acquiring Dallas’ first-round pick (No. 26 overall), as well as Boban Marjanović, Trey Burke, Marquese Chriss, and Sterling Brown. In exchange, the Mavericks will receive Wood from Houston.

Dallas will also include Sterling Brown in the deal, source said.

Wood is a talented (though at times, frustrating) player. And as far as the players go, he’s clearly the main prize in this exchange. He’s coming off of the best two seasons of his career. He averaged a career-high 21 points per game in the 2020-21 season and complemented the scoring with a then-career-high 9.6 rebounds.

Wood will also be only 27 when the 2022-23 season starts. Many NBA fans felt that the Mavericks — coming off of a Conference Finals loss — did well to land a relatively young player coming off of his two best seasons.

Most of the commentary was around Wood.

I'm not a crazy fan of Wood but this is a pretty solid trade for Dallas, didn't give up a rotation player, moves Dwight Powell to the bench making the Mavs a little bit deeper. He doesn't fix all the problems but a good starting point. https://t.co/wsQKdqFoqF

Big W for the Mavs https://t.co/p8XOjyLfRL

This feels like an absolute steal for Dallas. A difference maker for a bunch of guys who don’t play https://t.co/YAK7xUmvYr

Christian Wood is a rare archetype

If they can get him to buy-in, this could be a steal for Dallas https://t.co/xszi3NCSbo

I’m really unsure on Wood but if you can get a top-50ish player for a pick and money that doesn’t play??? Yea, no-brainer. https://t.co/Xm2CM5JRj0

Christian Wood was 1 of 13 players to average 15 points and 10 rebounds this season.

Among that group, Wood had the highest 3-point field goal percentage at 39% (on 4.9 3-point attempts per game). https://t.co/wCFBQEgY3d

With the trade, the Rockets now have three first-round picks. In addition to Dallas’ No. 26 pick, Houston has its own No. 3 pick as well as the No. 17 pick from the Brooklyn Nets.

This deal left some speculation as to what the next move for the Rockets may be.

Rockets looking to avoid the Wood/No. 3 pick logjam right from the start. https://t.co/1WP3Jvf5BJ

I would suspect the goal is now to use No. 26 with No. 17 in an effort to move up a few spots. I don't think they're looking for a late 1st in a vacuum — that's part of why Wood/Gordon weren't dealt in February. https://t.co/4Ai4KGrN83

Indeed, there are many more potential moving parts out there. So, as big as this trade was, don’t be surprised if one or both of these teams is involved in an even bigger one before the NBA Draft gets going.