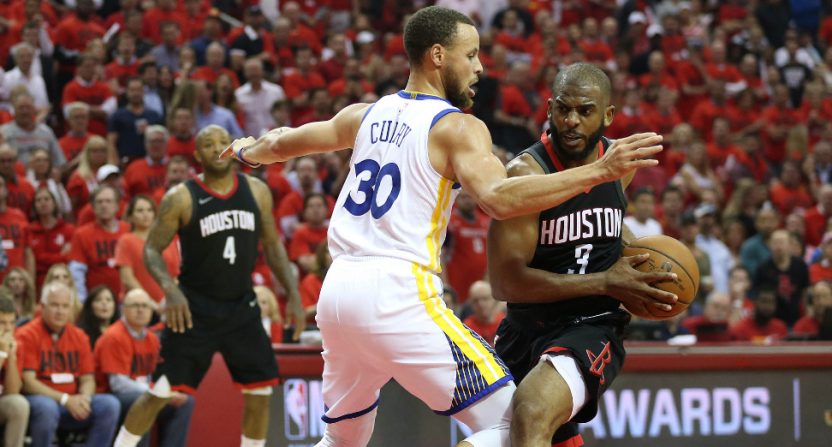 Game 1 of the NBA’s Western Conference Finals Monday saw the Golden State Warriors pick up a decisive 119-106 road victory over the Houston Rockets, with Kevin Durant dropping 37 points and Klay Thompson adding 28. And the amount the Warriors won by despite Steph Curry having a bit of an off night (18 points on eight-of-15 shooting, very good for most players but tame by his own standards) had many wondering if this series would be any contest at all, with the likes of TNT’s Charles Barkley saying “Warriors in 3.” Well, for one night at least, Houston had answers for those doubters, posting a massive 127-105 win in Game 2 Wednesday to even the series.

That Rockets’ win was boosted by 27 points (albeit on 9-of-24 shooting) and 10 rebounds from James Harden, 27 points (on eight-of-15 shooting) off the bench from Eric Gordon, and 22 from P.J. Tucker (who hit eight of the nine shots he took from the field). And Chris Paul also had a nice night, posting 16 points, six assists and four rebounds, while Clint Capela added another 10 rebounds. Plus, the Rockets as a whole made 51.5 percent of their shots from the field and 38.1 percent from deep.

But a big part of this was about the Houston defense. Durant went off for 38 points, but the rest of the Warriors were largely held in check, with Curry (16 points on 36.8 percent shooting) and Thompson (eight points on 27.3 percent shooting) particularly contained. Overall, Golden State had a field-goal percentage of just 45.9 percent, below the 47.4 they posted during the regular season (fourth-best in the league), and that would fall to just 41.3 percent if you remove Durant’s 13-for-22 (59.1 percent) showing. Even with Durant (who made three of seven three-point attempts), they shot only 30 percent from deep. Durant had a good night; almost everyone else didn’t. And it’s awfully hard for one guy to stand up to a whole team that’s clicking, as we’re seeing in the other conference final.

Does that mean anything for the series as a whole? Maybe not. It’s presumably going to get tougher for Houston when the series resumes at Oakland’s Oracle Arena Sunday, and just because the Warriors outside Durant weren’t able to do much offensively Tuesday, that doesn’t mean that will be the case for the rest of these games. Maybe they’ll bounce back, and maybe Game 1 will be the more accurate picture of this series. But maybe the Rockets will stay hot, and continue to compete offensively and defensively the way they did Tuesday. If that’s the case, this could be a lot closer than many thought.