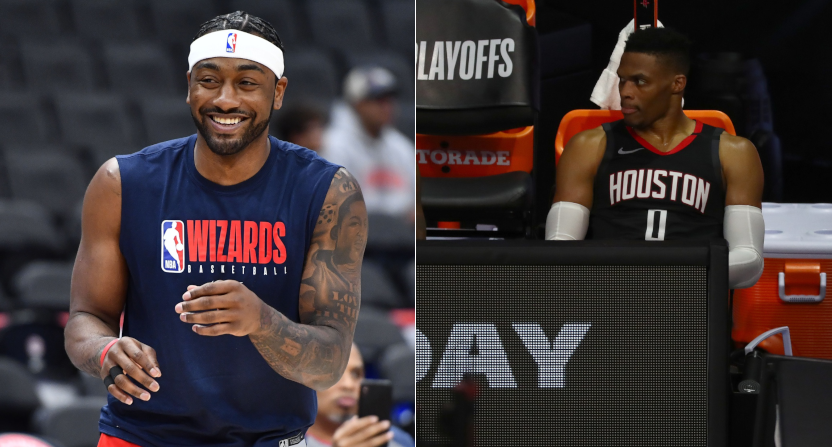 For the second straight year, Russell Westbrook (seen at right above during a September game) has been involved in a blockbuster trade. Last July, the Oklahoma City Thunder sent him to the Houston Rockets, his “preferred destination,” in return for Chris Paul and four first-round picks. But while Westbrook showed some promise at times in Houston, it was somewhat of an awkward fit at other times, especially with him alongside another high-usage player in James Harden. And while the Rockets finished first in the Western Conference, they needed seven games to get past the eight-seeded Thunder in the first round of the playoffs, then fell in five games to the eventual-champion Los Angeles Lakers in the second round. And Westbrook asked for a trade late last month, and he’s now received it, being sent to the Washington Wizards for John Wall (seen at left above during a March practice) and a first-round pick. ESPN’s Adrian Wojnarowski broke that news Wednesday night:

Houston has agreed to trade Russell Westbrook to Washington for John Wall and a first-round pick, sources tell ESPN.

Shams Charania of The Athletic and Stadium later relayed the details on that pick’s protection:

This is an interesting move for both franchises. Wall had been with the Wizards since they drafted him first overall in 2010, and he’d done a lot of impressive things with them, including earning five straight All-Star team selections from 2014-18. However, he has faced injury issues in recent years, and he hasn’t played since December 2018; he suffered a heel injury then, underwent surgery, then developed an infection, and then fell and ruptured his Achilles tendon.

Wall did return to the team for practices in March (he’s seen at left above in a pre-game one from March 6). And after the COVID-19 pandemic caused the suspension of the season later in March, he said in May he was “110 percent” and “itching to return.” However, Washington GM Tommy Sheppard said in June that the pandemic had caused Wall some setbacks in his recovery, saying “He definitely lost all the basketball gains that he had made.” And the Wizards said he wouldn’t be ready to play this season, so they didn’t bring him to the bubble in Orlando.

Even while Wall was healthy, there were some issues fitting him in with Bradley Beal. So it will be interesting to see how he does with Harden. There are also questions about his long-term health. Wall is only 30, but he has played in the NBA for a decade, and the knee and Achilles tendon injuries he has suffered are significant. But if he is healthy and effective, he could be an interesting piece for the Rockets.

Meanwhile, the Wizards now get a new backcourt partner for Beal. And they certainly obtained Westbrook at a better price than the Rockets did; one pick and Wall feels like a fair bit less than four picks and Paul. And Westbrook definitely can be an excellent player in the right circumstances; he’s a former league MVP (2016-17), a eight-time All-NBA selection, and a nine-time All-Star selection. But he’s also now pushed his way out of two teams in two years, and he’s 32, and he’s often not very efficient (he’s shooting 43.7 percent from the field for his career, although that did improve to 47.2 percent last season). We’ll see how he fits in with Washington.