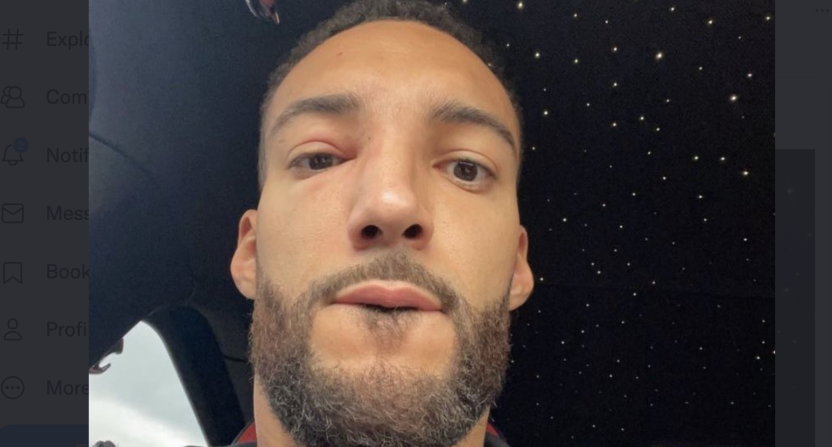 It’s not the weirdest injury we’ve ever heard from a professional athlete, but Utah Jazz center Rody Gobert shared a pretty good one on Thursday when he explained that one of his bees stung him on the nose, leading to a very funky swelling.

Gobert explained to reported that he suffered a bee sting on his nose earlier in the week while changing the queen out of the beehive on his property.

Rudy Gobert got stung on the nose by a bee from the hive he owns at his house. There’s some swelling, but he can see fine. “There were seven guys, and I was the only who came out,” he joked to open his media availability.

The Jazz big man also shared a photo of the sting’s effects on his Instagram page.

“It bee your own bees sometimes,” said Gobert on Instagram.

Gobert made it clear during his press conference that it’s just part of the deal when you’re a beekeeper and it’s happened a few times now. He also championed the health benefits of a bee sting as its venom has anti-inflammatory properties. No word on whether or not the NBA might test him for banned bee substances.

Rudy said he got stung two days ago. He owns a hive, and changed the queen out. He said this is the third time he’s been stung. He mentioned multiple times that a single bee sting can actually have health benefits.

Gobert’s bee-related mishaps certainly got the NBA world talking on Thursday as he and the Jazz prepare for Game 6 against the Dallas Mavericks on Thursday evening, with some drawing parallels between the bees and teammate Donovan Mitchell, who have been rumored to have a bad relationship.

I can't tell if this is a joke, a metaphor, or just an insanely Rudy Gobert thing to happen https://t.co/RDm4YLP5ro

The true story is that Donovan sent Rudy to guard the bee in the arena basement. Then the bee stung his bottom and now his bottom is big. https://t.co/EKEiOeP43Y

Even his hive doesn't rock with him smh https://t.co/y5HGR9mqIb

If this is anything like 2020, everything is about to shut down so we don’t all get stung by bees. https://t.co/dhlYLYe79J