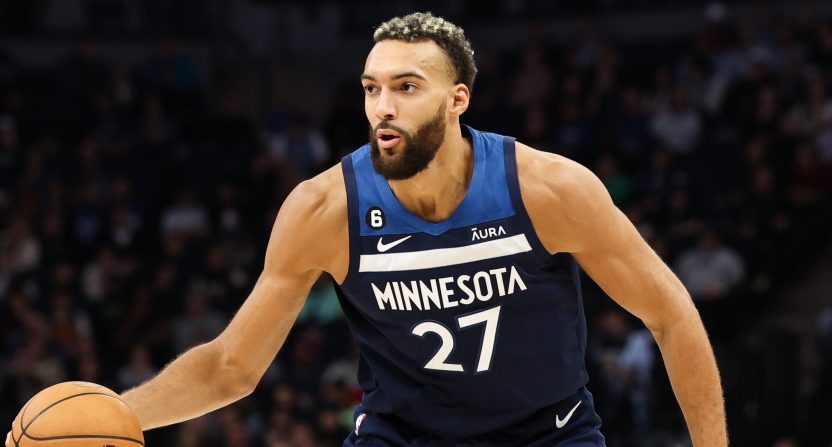 The Timberwolves acquired Gobert back in the summer. The trade is remembered for Brian Windhorst and his foresight in what was an insanely spectacular television display. So far, the results aren’t really there.

The T’Wolves are 9-8 and hold the 10th seed in the NBA’s Western Conference. Thus far they’ve averaged 114.3 points per game and allowed 114.4 points per game. It’s certainly not the best mark, especially after they acquired a multi-time Defensive Player of the Year winner.

But Minnesota has gone on a mini-run lately. They’ve won four in a row, including a 105-101 victory over the Miami Heat on Monday night. In the game though, the Timberwolves were booed by their home fans. Gobert took issue with that. Longtime T’Wolves reporter Jon Krawczynski asked Gobert about his thoughts on the crowd and he didn’t hold back.

Rudy Gobert says he feels the Wolves are starting to play better, but took a step back with some mistakes tonight. He also is asking the fans to support them in their struggles rather than boo pic.twitter.com/2dvgNuTjX9

Gobert said, via Krawczynski, “I just don’t appreciate people that come in to boo your team. When you’re a fan, you gotta support your team in the tough or the good moments. There’s no team in NBA history that only had good moments, so if you’re not going to support us in the tough moments, just stay home.”

This is not the first time recently that fan etiquette has been discussed. It’s a complicated topic. But it isn’t a discussion that, most likely, ends well by going after fans. As evident by how the NBA world reacted to Gobert’s comments.

Oh this usually works well! Let’s see how it pans out this time. https://t.co/2pB2ab4mEP

I believe Glen Taylor would actually like you to come to the games whether you are going to cheer or boo. Thank you. https://t.co/ZxaNzEA9h0

Ah, we’ve reached the “blame the fans” portion of an underachieving team. Wolves fans, please apologize to Rudy for being unhappy the team is letting you down.

There’s a pretty obvious way to avoid getting booed, maybe try that https://t.co/hDhEdw1CCt