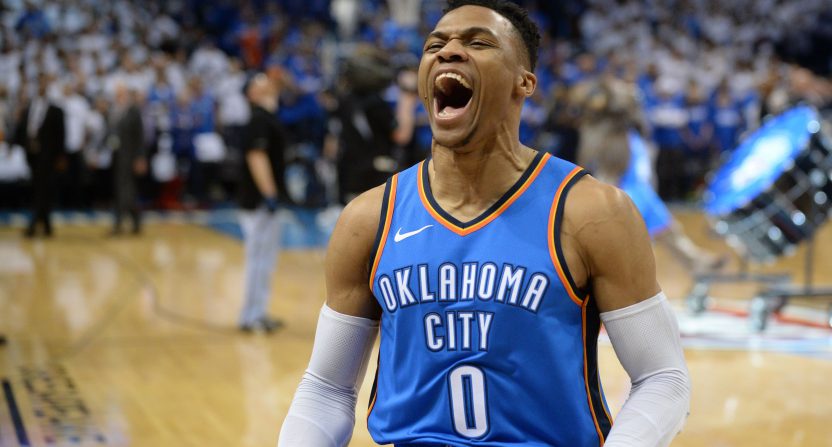 The Oklahoma City Thunder were done. I’d actually started a post an hour ago about how big of an embarrassment the Thunder’s Game 5 performance was. That was when they trailed the Utah Jazz 71-46 with 8:30 remaining in the third quarter, while trailing Utah 3-1 in the series. This was the true definition of a “must-win” game for the Thunder, and they were down by 25 points, at home, with a roster featuring Russell Westbrook, Paul George, Carmelo Anthony, and Steven Adams.

And then Westbrook and George took over.

The Thunder went on an incredible 32-7 run to close out the third quarter and tie the game, with Westbrook and George scoring 30 of those points. Overall, Westbrook (45) and George (34) combined for 79 points in a 107-99 Thunder victory. Westbrook also had 15 rebounds and seven assists.

Brodie and Playoff P combined for 79 (!!!) points in the Thunder's comeback victory pic.twitter.com/Mbfybuagzo

Over the final 20:30 of the game, Russell Westbrook and Paul George were a combined 20-for-35 from the field, including 6-for-8 from three, and 8-for-9 from the foul line. They scored 54 of Oklahoma City's 61 points, and almost doubled the Jazz (54-28) by themselves. Remarkable.

The @okcthunder are the third team in the last 15 years to come back from 25+ points down in the second half to win a playoff game, joining the Clippers (2012 at Memphis) and Cavaliers (2017 at Pacers). #ThunderUp

The Thunder overcame a 25-point deficit in the final 8:30 of the 3rd quarter to tie the game heading into the 4th.

Russell Westbrook tied a career playoff-high with 20 points in the 3rd quarter. pic.twitter.com/fKfBnKapld

It’s the largest comeback victory in Thunder history, including the regular season.

And again, they made that comeback (to tie the game) in just over eight minutes. It was an amazing comeback, but you also have to wonder where that effort was before that with the season on the line.

In order for Oklahoma City to extend the series to a Game 7, they’ll surely need the effort to be there from the opening tip. It’s going to be a wild atmosphere in Salt Lake City as the Jazz look to close out the series.