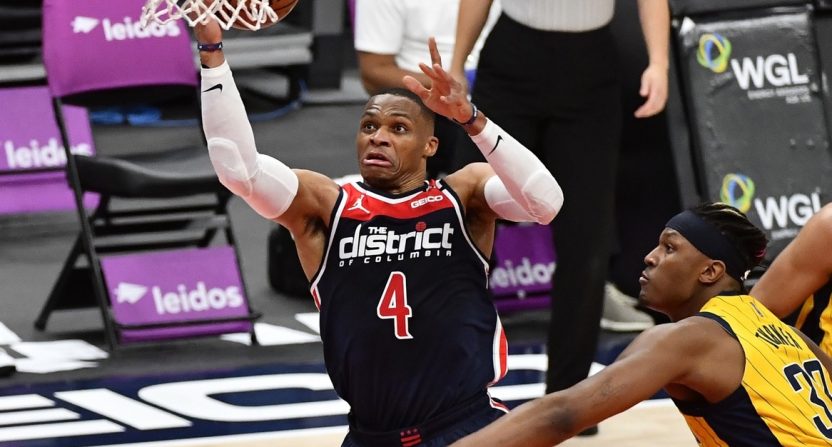 On Monday night, Russell Westbrook reminded fans and media why the Washington Wizards were a popular playoff pick in the NBA’s Eastern Conference.

The star guard notched 35 points, 14 rebounds, and 21 assists in a 132-124 win over the Indiana Pacers. The performance was the first of its kind in NBA history, as The Athletic’s Fred Katz pointed out.

I checked on @bball_ref how may times that’s happened since 1983: ZERO results came up.

Have a night, Russ.

The triple-double was also Westbrook’s 16th of the season, which set a Wizards franchise record. He’s only played in 38 games for the team. The previous record-holder was Darrell Walker, who played 283 games for Washington.

Westbrook’s detractors will point out that all of those triple-doubles haven’t led to wins for the Wizards. Washington had a 7-8 record in the previous 15 games in which Westbrook reached double digits in points, rebounds, and assists.

Related: Bradley Beal is putting together video game numbers, has a ridiculous streak to start the season

RUSS GOING OFF ON LEAGUE PASS!

Washington might be the most disappointing team of the 2020-21 season. Going into Monday’s game, the Wizards held the No. 13 spot in the Eastern Conference (out of 15 teams) with a 16-28 record. (Amazingly, they’re not last in the Southeast Division because the Orlando Magic are actually worse at 15-31!)

Rui Hachimura was Washington’s second-leading scorer with 26 points and Chandler Hutchison added 18. On the other side, Domanta Sabonis led the Pacers with 35 points with Malcolm Brogdon scoring 26.

Russell Westbrook is officially averaging a triple-double through 37 games.

The veteran guard is also currently averaging a triple-double for the season, an accomplishment he achieved for three consecutive seasons from 2016 through 2019.

But update the Wizards’ record to 8-8 when Westbrook puts up a triple-double. Washington is still five games behind the Miami Heat for that eighth and final playoff spot in the conference, however. Only 28 games remain in the 72-game schedule that the NBA is playing this season.