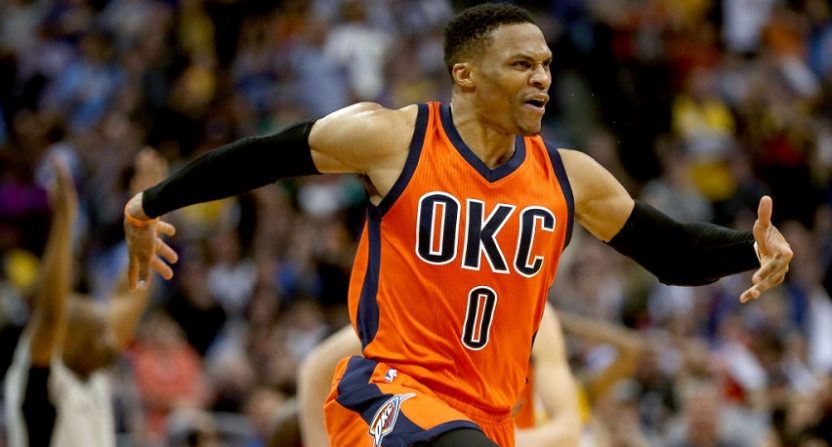 Now that his season, along with its logic-defying numbers, is over, we can view things with some retrospective context and wonder: How will history look back at Russell Westbrook’s 2016-17 campaign?

His individual accomplishments cannot be denied and may not be matched or surpassed in quite some time. No player has ever recorded more triple doubles in a season than Westbrook’s 42, breaking Oscar Robertson’s record set in 1962. He’s also the first player since the Big O to average a triple-double for an entire season. His 31.6 points per game led the league, the highest scoring average in a season since the 2013-14 season, when Kevin Durant averaged 32 per game for the Thunder.

The story of Westbrook’s mind-blowing statistical season wouldn’t be complete without mentioning Durant. After Durant left OKC for Golden State last offseason, Westbrook decided to double down and stay with the Thunder in a contract extension. Prognosticators predicted that Westbrook would go off in 2016-17, a man on a mission to prove that he could be the top dog on a championship contender in a Western Conference loaded with elite teams.

Westbrook went on to have some insane stat lines during the regular season, including a 57-point, 13-rebound, 11-assist game in March against Orlando, breaking the record for points scored in a triple-double. Russ’ incredible performances delighted your senses. You could hear and feel the roar of the crowds, the awe he inspired from fans, teammates, opponents and former legends like the great Robertson himself.

And yet despite all these individual achievements, Westbrook may not win the league’s Most Valuable Player Award. No MVP in decades came from a team that didn’t finish as one of the top few seeds in its respective conference. OKC finished sixth in the West during the regular season. Houston’s James Harden— Westbrook’s former Thunder teammate— San Antonio’s Kawhi Leonard and Cleveland’s LeBron James are Westbrook’s perceived biggest threats as MVP contenders.

As amazing as Westbrook’s season was, how would it be perceived if he didn’t win MVP? Robertson didn’t win MVP the year he averaged a triple-double, so maybe it won’t matter. Time will tell.

Westbrook’s season could also be viewed through the prism of a very simple juxtaposition: Individual versus team success.

Oklahoma City won 47 games during the regular season, eight fewer than Houston’s 55, helped by Harden’s 15 win shares, which led the league. The MVP may be a regular season award, but how Westbrook’s body of work in 2016-2017 will ultimately be looked at surely extends to what just happened in the playoffs.

Here are the facts: Westbrook averaged 37.4 points per game, 11.6 rebounds and 10.8 assists per game over the five games against Houston. Oklahoma City lost four of those games. Westbrook’s usage rate, defined by Basketball-Reference as “an estimate of the percentage of team plays used by a player while he was on the floor”, was 47.

To put that into context, Westbrook led the league in usage rate in last year’s playoffs with a 34.3 usage rate. Russ’ usage rate was higher than Michael Jordan’s usage rate for the ToonStars in Space Jam, a movie literally created for MJ.

Was Westbrook’s usage rate that high against Houston because it had to be for the Thunder to have a chance in the series, or because he didn’t have enough trust in his teammates?

Take this with a grain of salt, because five games is a relatively small sample size. BUT: Oklahoma City outscored Houston by 3.6 points per 100 possessions with Westbrook on the floor, per NBA.com, and were outscored by an incredible 66.4 points per 100 with Russ on the bench. Though Westbrook generally only played with his best defensive teammates on the floor, like Steven Adams and Andre Roberson (contextualized here by Tom Haberstroh) Oklahoma City allowed an alarming 142 points per 100 possessions against the Rockets when Westbrook sat.

Westbrook’s heroics look admirable from the stats laid out in the previous paragraph, but maybe those numbers occurred because he tried to do too much.

In a four-point loss in Game 2, Westbrook scored 51 points, dished out 13 assists and grabbed 10 rebounds. It was the most points scored in a playoff triple-double in league history. But Westbrook shot a ghastly 17-of-43 to achieve that, including a 4-of-18 showing in the pivotal fourth quarter. His 14 missed shots in the fourth were the most misses in any quarter over the last 20 postseasons.

Westbrook attempted 30.8 field goals during the series and hit just 38.8 percent of them, and 26.5 percent of his threes. That’s the epitome of volume shooting, a tactic which rarely leads to team success. With Houston point guard Patrick Beverley guarding Westbrook in the halfcourt, those numbers were worse and Beverley was in the right to talk trash about it following the series.

Would the Thunder still be in this series if Westbrook didn’t try to do too much, better integrating his teammates in the flow of the Oklahoma City offense? We’ll never know, but it’s worth considering.

Westbrook’s season will ultimately be defined by his regular season success, and everyone will remember his triple-double records for years and decades to come regardless of whether he wins MVP or not. But Russ’ lack of success in the postseason will certainly leave a sour taste in people’s mouths as the book is closed on his 2016-2017 season, one that— for better and worse— was without question one for the ages.