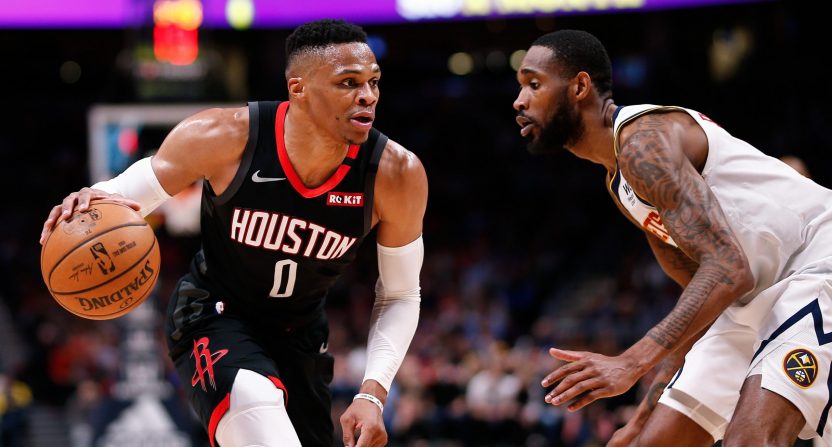 Earlier this season in Houston, we saw the expected growing pains of a normally high-usage player trying to fit into the most unique, individual-oriented offense in the league. Russell Westbrook, trying to find his place with James Harden’s Rockets, launched bad shots and put out inefficient performances. In November, he scored 21 points per game on just 41 percent shooting, including a ridiculous 21 percent from three, on five attempts per game. He had nights in which he went 6-for-20, 5-for-21, 9-for-26, and 3-for-11.

His fit alongside Harden was never going to be seamless from the start. Westbrook has little use off the ball, and for years he has featured heavily in Oklahoma City offenses while piling up impressive box score stats. Harden wants to space the floor, dribble a bunch, and iso. There is little ball movement or even cutting so as not to muck things up for Harden’s stepbacks and pick-and-roll dance with Clint Capela.

Westbrook is known as a player who relaxes off the ball, which makes sense given that he expends most of his energy on the ball. But he was going to spend too much time deferring to Harden to do nothing and simply stand on the perimeter. His role couldn’t be as a catch-and-shoot guy; this season, among players with at least two catch-and-shoot attempts per game, Westbrook has one of the worst effective field goal percentages in the league.

In spite of the awkward theoretical fit, the Rockets have done a better job of integrating Westbrook as the season has gone along. The biggest change has been to Westbrook’s shooting profile, which is considerably better and more efficient. In the first 23 games of the season, Westbrook put up an even five threes per game and shot at a ghastly 45.5 effective field goal percentage. In the 15 games since, he has cut his three-point attempts to three per game and upped his EFG to 50 percent.

Westbrook has attempted only two threes in his last five games. He scored 35, 32, 28, 45, and 32 points in those games, approaching a triple-double in each. The bricky midrange shooting hasn’t gone away, but we’ve seen fewer pull-up attempts within 10 feet. Focus on getting Westbrook to the rim, where he finishes well, and you can create better offense.

Since Dec. 15, Westbrook has picked up his production significantly. His usage rate is closer to Harden’s; it was around 30 percent prior to Dec. 15, and it has met Harden in the middle at 34 percent since. In the last 15 games, both Harden and Westbrook is averaging over 30 points per game, and Westbrook’s counting stats haven’t gone away: he’s at 8.3 rebounds and 7.8 assists per game in that time.

The Rockets have improved significantly in the minutes Harden plays without Westbrook. In the last eight games, Houston has outscored opponents by 13.5 points per 100 possessions with Westbrook on the court without Harden (that number was eight points higher until a loss to Denver on Sunday, during which Harden was injured). The inverse of that, with Harden and without Westbrook, has seen the Rockets fall into the negatives. Given that Houston is also minus with both on the court in the last 10 games, it’s fair to say that the minutes Westbrook plays without Harden keep them afloat. It would have been hard to foresee that earlier in the season.

Westbrook’s resurgence has coincided with a massive Harden slump. Nothing has been going in for Harden since he shot 9-for-34 in Atlanta on January 8. Since that Atlanta game, Harden is shooting 33 percent from the field. He’s been subsisting mostly on free throws, and in his most recent two games, he shot just 13 times in each, going a combined 9-for-26. It seems that Westbrook has been trusted to handle an increased offensive load during Harden’s slump, and by shooting better quality shots, he’s delivered.

In spite of Harden’s downturn, it is a healthy coexistence, the clearest “my turn, your turn” we can see in the current NBA. Harden laps the NBA in isolations per game (14.7), but Westbrook is second at 7.2. The next closest is Damian Lillard at just 4.8. The Rockets’ offense takes its fair bit of criticism for a monotonous style, but they deserve respect for putting together such a coherent, conspicuous identity.

There have been signs that the two can play off of each other. Westbrook excels in transition. When Harden is double-teamed, Westbrook has shown more confidence receiving a pass out of it and attacking defenses. Westbrook can feast on opponents who are rocked to sleep by Harden’s dribbling, or who are set up for one of Harden’s usual actions.

The simple fact of having two perimeter stars is enough to put you in contention. Harden’s recent slump and then injury, plus a brutal gauntlet of poorly-timed crucial Western Conference games, has put the Rockets in danger of dropping below the feisty Thunder (which would be an amazing twist). At some point Harden will start making shots more consistently, and they will start putting consistent wins on the board.

How it works in the playoffs is a different question. Westbrook’s inability to shoot threes could become more of a liability, especially if he starts chucking them again. We all know the criticisms of playoff Harden.

Even still, Westbrook fitting more nicely into the Rockets offense is a positive sign. Efficient shooting from both guards at the same time, though that sometimes seems hard to come by, would make them a difficult combo to stop.

(Stats from NBA.com and Basketball-Reference.)