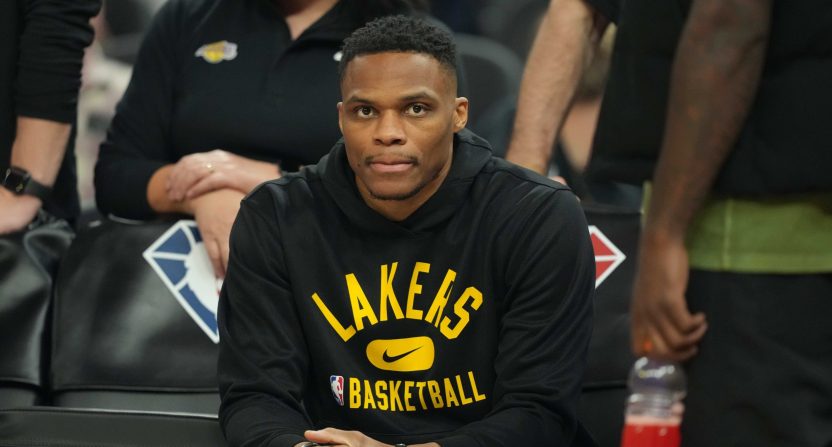 With the 2022-23 NBA season soon starting, Los Angeles Lakers guard Russell Westbrook may be used in a way that’s almost completely unknown to him.

On November 28, 2008, Westbrook played the 17th game of his career. As was the case in his first 16 games, he was used off of the bench. The following day, Westbrook started for the Oklahoma City Thunder. He started every remaining game that season and remained a starter in every game he played over the subsequent 13 seasons. But that may be coming to an end.

Jovan Buha and Sam Amick of the Athletic recently said that “there are strong indications” that Westbrook will not be traded before the start of the season. They also reported that “while the Lakers have been hopeful the Westbrook experiment might be a success this time, sources with knowledge of the situation told The Athletic that the prospect of Westbrook coming off the bench is being strongly considered.”

This news drew a decidedly mixed reaction from the NBA world.

The Lakers are doing everything they can to get Russ to demand a trade and you know what it's at least entertaining. https://t.co/bzB464lGN6

6th man of the year Westbrook if he comes off the bench.

Hes going to make the Lakers the number 1 seed in the West because he's going to enable the offensive potential of players like Austin Reaves and Troy Brown.

I’m sure a player making 47 million will come off the bench why do y’all listen to these reporters man https://t.co/4AIC0Jmr2H

has anyone told russell westbrook https://t.co/bytrvmPy76

This would be a massive adjustment for Westbrook. Not only has he been a starter for nearly all of his 14-year career but for most of that time, he’s been one of the NBA’s best players. Westbrook is a former MVP, a nine-time All-Star, has been All-NBA First Team twice, Second Team five times and Third Team twice. Even in his prime years, there were some definite flaws in his game. But Westbrook will certainly be a first-ballot Hall of Famer when his career ends.

That said, he is not coming off of a good season. His numbers were down nearly across the board and he struggled to work himself into the Los Angeles offense. In July, it was reported that LeBron James wanted the Lakers to move on from Westbrook. Of course, trading Westbrook is easier said than done, given his massive salary.

If Westbrook can handle coming off of the bench, that’s probably the best, most likely solution. If not — and particularly if he’s losing minutes to longtime rival and current teammate, Patrick Beverley —  upcoming season could be a daily soap opera.