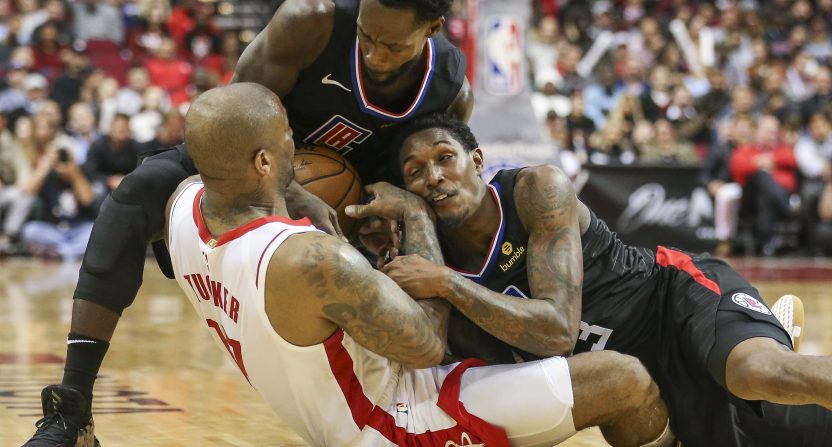 Westbrook’s specific issue with Beverley stems in large part from this particular moment from the 2013 postseason, when then-Rocket Beverley went for a steal as then-Thunder Westbrook attempted a routine timeout call.

The collision left Westbrook with a torn meniscus, knocking him out for the year and costing the top-seeded, 60-win Thunder team one of their best shots at a title. They were eliminated by Memphis in five games in the conference semifinals. (It’s important to note that Westbrook also did the “go for the steal as opponent calls timeout” play himself, too, so there’s not a ton of high ground for him.)

In any case, they’ve been beefing for a long time, well-chronicled here by SB Nation.

That’s obviously a lot of backstory, but it informs what happened tonight as Westbrook (now on the Rockets) and Beverley (now on the Clippers) faced off in Houston. The Rockets won 102-93 thanks mostly to James Harden, who went for 47 points on 26 shots. That was despite Beverley’s defense; Beverley actually fouled out (somewhat cheaply) in the second half.

Westbrook, who had a very Russ line of 17 points on 20 shots, took the opportunity to extend the beef a bit by pointing out that Beverley hadn’t exactly done a lot to slow down Harden. Being Russ, he took it one step further:

Russell Westbrook: “Pat Bev trick y’all, man, like he playing defense. He don’t guard nobody, man. He just running around, doing nothing.” Made sure to note that James Harden scored 47 tonight.

Obviously this quote sent the #THISLEAGUE crowd into a bit of a frenzy, but it is legitimately funny, on a few levels. First, “He just running around, doing nothing” is objectively a funny way to mock someone’s defense. Second, that’s also exactly how you could describe Westbrook’s offense off the ball, except without the whole “running around” thing.

And finally, Beverley really is a solid defender! Harden going off for 47 with Beverley on him (and fouling him out, even) just makes Harden’s 47 even more impressive. By choosing this moment to slight Beverley, Westbrook essentially took the moment to chant “Over-rated!” at his opponent, without realizing that just makes the victory less impressive. Beverley, for his part, refused to engage:

I asked Pat Beverley about these comments and he had no interest in responding. “Don’t start that, don’t start that. I don’t care about that.” https://t.co/SyxVJtLc5T

This particular feud is apparently here to stay.