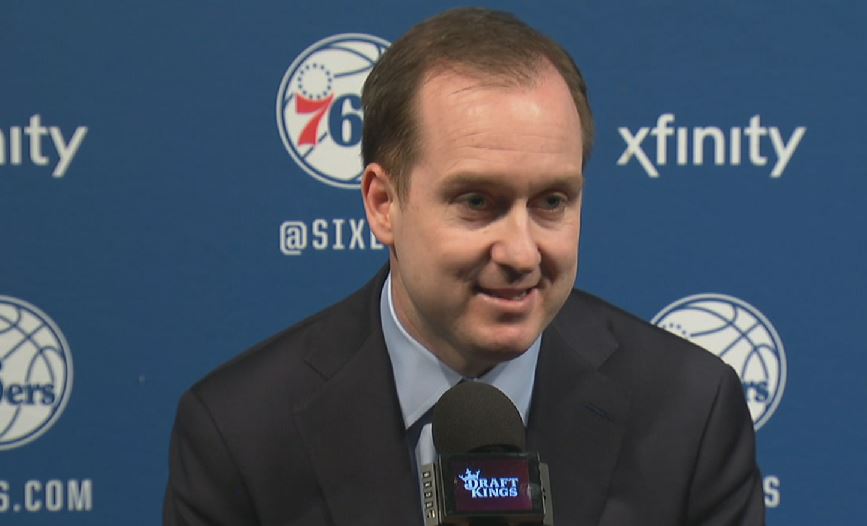 Sam Hinkie told millions of Philadelphia 76ers fans to “trust the process.” Well, eight months ago Hinkie resigned from his role as General Manager and President of Baseball Operations for the 76ers before the process was complete.

In a massive profile written for Sports Illustrated, Hinkie went into great detail about his time in Philly and his new adventures on the west coast in Silicon Valley.

“When I meet someone out here, I’ll say, ‘I’m kind of between gigs,’ ” Hinkie says. “Or, if I’m being cute, sometimes I’ll say, ‘Oh, I’m like a founder that got pushed out for professional management,’ and they’re like, ‘Oh, first time? That happened to me in ’85 and ’93 and ’02.’ ” He pauses. “There’s not the sense of shame for failure here that there is some other places.”

The thing is, even in sports there isn’t that much of a sense of shame for failure either. I mean, Jeff Fisher is still employed as an NFL coach and college football coaches are sometimes fired despite going 9-3.

But the thing is, as SI puts it, did Hinkie fail? The former NBA exec took over the 76ers franchise in May 2013 when the team was on a downward spiral. So Hinkie decided to help accelerate the spiral and embrace the tank.

You know the story, Hinkie helped them tank and now even though he’s not there, 76ers fans are hoping those young guns develop into the stars many thought they would be.

But as fans in Philly hope and pray Hinkie’s plan ends up working, Hinkie is content on the West Coast enjoying life as a quirky former NBA exec and hopeful Silicon Valley entrepreneur.

The new HBO hit Westworld focuses a lot on “the narrative.” Well, Hinkie doesn’t like that term.

“By doing anything in chronological order—reading a job candidate’s interview responses, watching clips of a player—he believes we end up overvaluing the context. I liked this candidate’s first three answers, so I’m predisposed to like the fourth.”

“The problem with narratives is that they contain heroes and villains and protagonists and character arcs and redemption and vindication, all of which can overshadow or obscure fact and truth and reality. They derive, as Hinkie puts it, from “the lizard parts of our brains.” Which means they’re simplistic and, for a man who believes there are roughly 2,000 shades of gray, this is troubling.”

So Hinkie has gone from constructing the future of the 76ers to complaining about “the lizard parts of our brains.” Got it.

But maybe that’s part of his charm and awkwardness.

Will Weaver worked for the 76ers and is now a special assistant to Nets’ coach Kenny Atkinson. He first met Hinkie in the mid-2000s and it sounds like the meeting was anything but normal.

“He’d say the nicest things about me that didn’t feel like compliments. He had this ability to assess without dragging himself into an emotional state,” Weaver told SI.

After the meeting, Weaver did what most people do after a job interview – he called his mom.

“That’s a guy I want to work for someday,” Weaver started with before adding, “he’s the weirdest dude I’ve ever met.”

To show off how weird he is, we’ll now fast forward to the end of the piece. At the end, Hinkie examined a piece of sand.

As we go, Hinkie talks about Bill Belichick, whose brain fascinates him. And how much he respects Danny Ainge. And how hard it is to find good big-man coaches. At one point he stops and picks up a piece of sand. Hold it up to the sky and it obscures 10,000 galaxies. It’s a useful exercise in perspective.

So the lesson is, if you examine a piece of sand, you’ll learn something? Who knows – just read the profile. it’s pretty good.