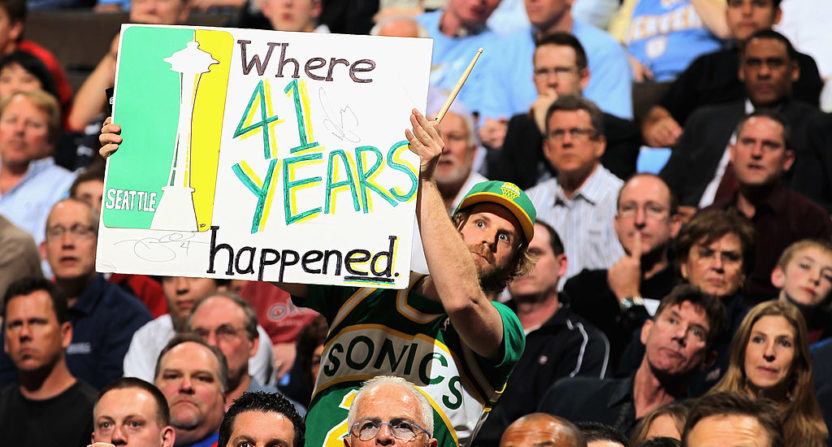 Ever since losing the Seattle SuperSonics to Oklahoma City, the push to bring the NBA back to the Emerald City has been an uphill battle. On Tuesday, the city cleared one giant hurdle to potentially luring a team when the city council received a Memorandum of Understanding confirming a formal agreement to begin construction on a $660 million arena by 2020.

This is a significant step in the right direction to enticing the NBA to either move a franchise to Seattle or to add an expansion franchise in the vacant NBA city. The plan also focuses on renovating KeyArena rather than build a completely new stadium. That means the space is already, in theory, available. In addition to having the arena updated according to modern NBA standards, the arena would also be designed in a way to be suitable for a possible NHL franchise as well. But for now, keep in mind the NBA is not involved with any of these negotiations.

Oak View Group is the group prepared to foot the bill for the privately-owned and finances arena costs, taking the burden of the costs off the city’s hands. Having a state-of-the-art arena privately funded is always nice to have in an era where cities are taking the brunt of the costs for stadiums when teams are getting a sweet deal on their end.

“The completion of the MOU provides a level of certainty that Seattle has never had before, and OVG, the City Council, elected officials and the residents of Seattle, must now turn our attention to the NHL and NBA and make it undeniably clear that we are more than ready for them to come to Seattle,” Leiweke said in a statement.

Now, here’s where the story takes a potentially bizarre turn.

The mayor of Seattle, Ed Murray, was expected to make a formal announcement to the public about this deal at a press conference on Tuesday morning. However, as reported by KING 5, that press conference was canceled due to just-surfaced allegations that the mayor had molested his cousin in the 1970s. With accusations piling up against Murray, he will resign effective later today. What that means for this agreement is largely unknown at this point, but if the deal is privately funded there is still a pretty decent chance the deal will move forward.

The city council must now approve the Memorandum of Understanding by December 31 in order for work to begin on the arena. The clock is now officially ticking. IF the arena does get approved and is ready for the NBA, and IF the league agrees to place a team there, let’s just hope that franchise takes up the SuperSonics name once again.