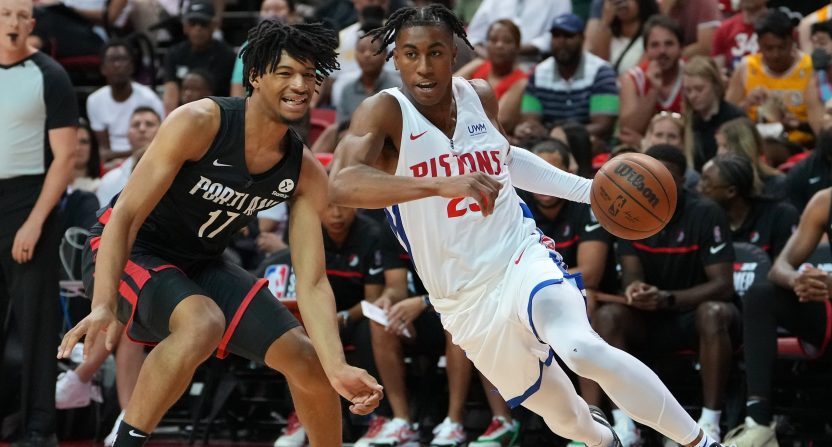 One of the biggest mysteries coming out of the 2022 NBA Draft was former Kentucky Wildcats guard Shaedon Sharpe.

The 19-year-old guard did not play for Kentucky after reclassifying into the 2021 high school class and enrolling in the program for the spring semester.

He was ranked as the third-best high school prospect in the class of 2021 and despite not playing a game in college, Sharpe was selected by the Portland Trail Blazers with the 7th pick in the 2022 NBA Draft.

Given how little most know about Sharpe given his lack of high-level basketball over recent months, many were excited to see him play in the NBA Summer League.

Unfortunately for Trail Blazers fans, his debut on Thursday did not go to plan whatsoever, playing only six minutes and shooting 1-for-3 from the field before being removed from the game with a left shoulder injury against the Detroit Pistons.

It was reported by NBA insider Chris Haynes that Sharpe would be undergoing an MRI to determine the severity of the injury, and the results are not what Portland fans were hoping to hear.

The team revealed in a press release on Saturday that Sharpe has suffered a small labral tear in his left shoulder, and that he will miss the remainder of the Summer League.

Portland is a franchise that has been cursed with injury woes to promising young players over the years such as Greg Oden, Brandon Roy dates back to Sam Bowie and even Bill Walton before.

Given their history as a franchise, Trail Blazers fans are a bit concerned that Sharpe has suffered this type of injury so soon into his NBA career.

Dear Blazers fan: I love you and I’m here for you.

A velociraptor didn’t rip off his arm.

Let’s not go to a dark place and start comparing this to Walton, Oden, Collins and Roy.

Re: Shaedon Sharpe: Shoulder labrum injuries in the NBA aren’t uncommon. Players like Dwyane Wade, Carmelo Anthony, & Dwight Howard have sustained the injury. If the tear is small & the instability is minimal, rehab can improve the issue w/out the need for surgical intervention.

The entire history of the Blazers is on endless repeat.

The curse is real. Don’t deny it.

Sharpe will be re-evaluated in 10-14 days, where at that point it will be determined what they do next with him considering how his rest and recovery process goes in that time period.

It must be frustrating for Sharpe considering he has extremely high hopes for his NBA career, stating back in June ahead of the draft that he sees himself as “one of the greatest players to ever play the game of basketball”.

Trail Blazers fans are hoping that Sharpe can get back on the court in a hurry to see whether or not that claim is true.