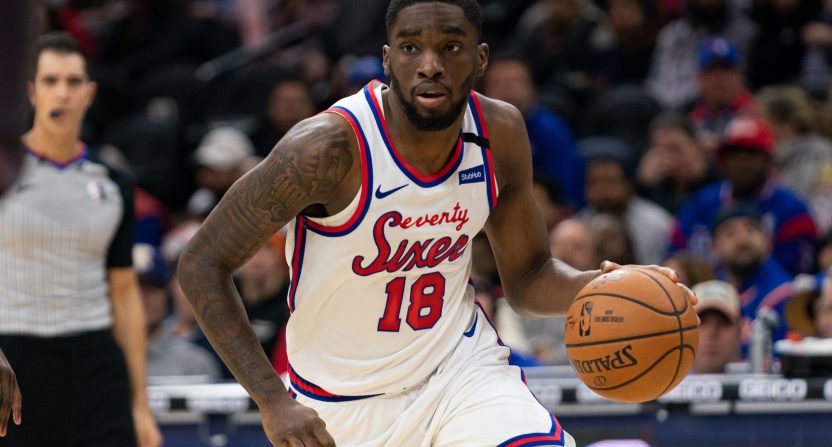 Not too many NBA fans were aware of who Shake Milton is before recently. The 23-year-old Philadelphia 76ers guard/forward is making sure they are very clear on who he is now.

With Ben Simmons and Joel Embiid out, Philly needed a spark in order to remain competitive as it holds onto a playoff spot. Enter Milton, who made his first career start in late January and has quickly set new marks for himself with each passing week. He grabbed a career-high nine rebounds against the Lakers in that game and set a career-high with 27 points in a loss to the Hawks a few days later.

In the last week, Milton’s game has really gelled. He scored at least 17 points in three out of four games while putting in 3o+ minutes in each game headed into Sunday. While the day is only half done, Sunday’s game against the Los Angeles Clippers might just be the breakout performance that gets fans to remember his name.

In the first half, Milton led the Sixers with 26 points on 10-11 shooting, including going 4-4 from three-point range, while Philly kept pace with the Clips in a high-scoring match-up. Milton found all kinds of ways to score, from dunks to three-pointers to creating for himself in the lane. It’s been quite a thing to watch.

Shake Milton with 8 early points including this STEAL & SLAM pic.twitter.com/u1F9LLo43G

Milton has been so dominant that the Clippers actually started double-teaming him at half-court just to try to cool him down. It did not work.

The Sixers lead 72-70 at the half (!) and all eyes will be on Milton in the second half to see if he can keep it up and power the Sixers to a huge victory. If so, we might be looking at the emergence of a new star in the league. Or at least, the next feel-good story, especially since Milton was a second-rounder who had to fight to make his moment. He’s certainly making the most of it.