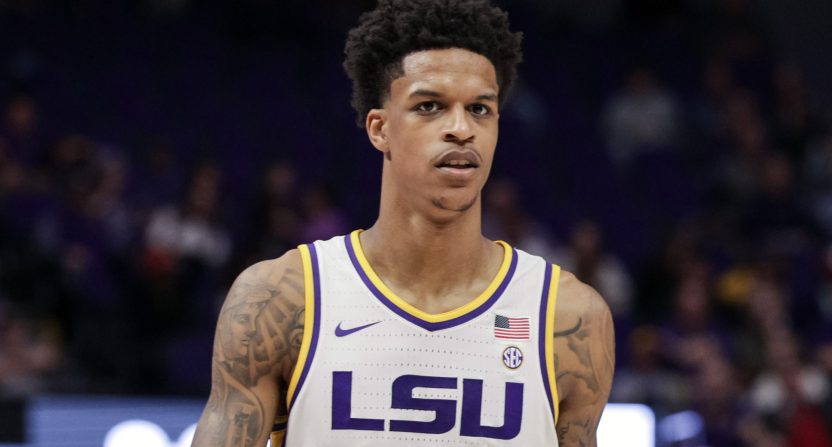 The NBA Draft is in a couple days and one notable player up to be selected is LSU star Shareef O’Neal. Shareef would be entering his father Shaquille’s footsteps.

If Shaq had it his way, Shareef wouldn’t be in the Draft this year and Shareef got very candid in a video news conference about he and his father having opposite views about Shareef’s future.

“We kind of bump heads about this process,” Shareef said. “He wanted me to stay in school. I wanted to better myself through this. He knows I’m working out with teams. But I’m not going to lie, we ain’t talked about this. I’m kind of just going through it. He didn’t do any pre-draft workouts; he just got straight on the [Orlando Magic], so it’s a different grind.

“So, he didn’t want me to do this, and I know he probably doesn’t want me saying this, but sorry. We’re both grown, we’ll get past it.”

Shareef is 22 but he only played college for three years. A heart condition in his freshman season kept him out with a medical redshirt. That, along with transferring from UCLA to LSU, it’s understandable why Shaq wanted his son to play in college another year and graduate.

It’s also understandable why Shareef would want to go to the NBA. That’s the ultimate goal and to hear Shareef talk, it felt like he wasn’t really progressing in college. So when the opportunity to participate in the G League elite prospect camp came up, Shareef went after it despite Shaq’s opposition.

“I felt like in college I wasn’t getting enough opportunity. I wasn’t feeling like myself in college,” Shareef said. “[The invite] kind of opened a lot of doors for me. … I feel like it really brought me back and kind of showed a little bit what I can do. And once I started getting calls from teams to work out, I was like, ‘Man, this is what I want to do.’ I mean I’m here, it’s right in front of me, so just go for it. So I continued to work.”

Shareef isn’t a top prospect and in fact, he isn’t really listed on too many mock drafts. That’s probably another reason why Shaq wanted his son to stay in school. But in the end, it’s up to Shareef to decide his own path and if he’s willing to work hard and he’s got what it takes, then being drafted late or not at all will just be a minor inconvenience in his career.