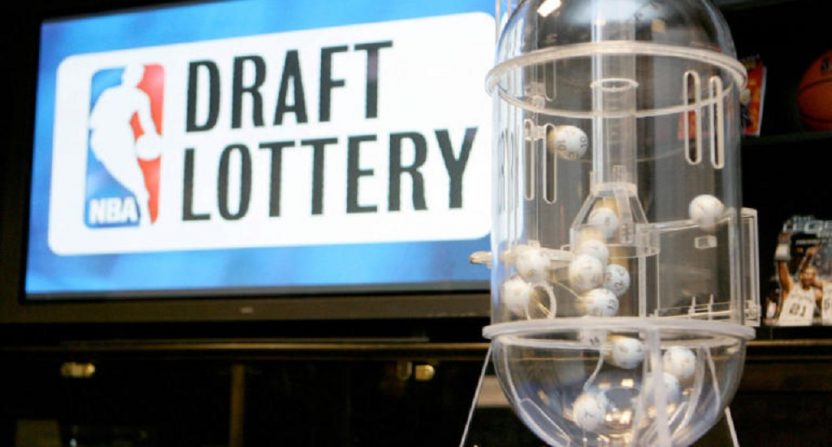 The 2018 NBA Draft Lottery is tonight in Chicago and televised at 7:30 PM ET on ESPN. Sadly, this is a night many NBA franchises have been looking forward to more than any of their actual games in the 2017-18 season.

Tanking was hilariously extreme this season, and the NBA was quite aware of it coming. The league passed a draft lottery reform that will go into place in 2019 in an attempt to lessen tanking. They even issued a warning to the Chicago Bulls about resting healthy players. In February, owner Mark Cuban admitted the Dallas Mavericks were better off losing and was fined $600,000 by the league.

But, the tanking certainly still happened for the Bulls, Mavericks, and several other teams, and now they pray the ping-pong balls bounce their way.

Every team picking in the lottery will get the opportunity to get a highly promising prospect in a loaded draft class, but landing a top-three pick will assure they get what appears to be a franchise-changing talent like Deandre Ayton, Luka Doncic, Marvin Bagley III, or Jaren Jackson Jr.

So, which teams need the top pick (or simply a top-three pick) the most? You could make an argument for just about every team, but here’s my stab at the top-six:

You may be thinking, “Uh, does a team that has LeBron James and is in the Eastern Conference Finals really need to win the lottery more than some currently garbage teams?”

And they very well may not.

But here are three reasons why I have them in the top six:

1. LeBron has the ability to opt out of the final year of his contract with the Cavs and become a free agent this offseason. Perhaps landing the top pick and a talent like Ayton or Doncic makes Cleveland a more appealing situation to him. They could also trade the pick for a proven, win-now player if that would make LeBron happier. It would open up a number of possibilities, and they’d surely let LeBron (the true GM) have a big say on how it’s handled.

2. If LeBron were to leave, well, then the Cavs really need a top talent in this draft to lead their rebuild. Their roster would look like a true lottery team.

3. It’s always fun to be reminded of how awful that 2013 Celtics-Nets trade was and how much it keeps backfiring for Brooklyn (the Cavs got this Nets pick from the Celtics in the Kyrie Irving trade).

The Chicago Bulls could really use a top-three pick, but their (GarPax) front office doesn’t deserve it.

The Bulls have made so many terrible decisions over the last several years, with the most bizarre decision being the one to acquire past-their-prime players like Dwyane Wade and Rajon Rondo before the 2016-2017 season to make a run… at mediocrity (and sure enough they finished exactly .500). Being in the middle — with no upside to get into title contention — is the worst place to be in the NBA and put a halt on the Bulls’ much-needed full-on rebuild. Then they traded star forward Jimmy Butler without getting a top-five pick back, though they lucked their way into No. 7 pick Lauri Markkanen looking like a future star (the Bulls will even admit they had no idea he’d be that good, and certainly not that quickly).

This season, the Bulls needed to be awful and do everything possible to get top-three lottery odds. Instead, they had a seven-game winning streak in December to kill those chances. There are a few interesting pieces on this team, led by Markkanen, Kris Dunn, and potentially Zach LaVine, but they need to come away with a great prospect in this draft to take the next step.

The last time the Bulls were good was after Derrick Rose fell into their lap in the 2008 draft, despite just 1.7% odds at the top pick.

In order to be a serious contender again, they likely need such luck with the ping-pong balls, especially because we can’t trust their front office to get it figured out otherwise.

I feel like it’s understated just how bad the Kings have been for a long while now. It’s now 12 straight years that they’ve missed the playoffs. They last had a .500+ season in 2005-06! They haven’t won a playoff series since 2003-2004. The current draft prospects are too young to even know what it was like to follow a good Kings team.

The Kings have a couple pieces to build around with their young backcourt in De’Aaron Fox and Buddy Hield, but they’re still nowhere close to contention unless they strike gold in the draft.

Aaron Gordon is a restricted free agent and was the subject of constant trade rumors in-season. Nobody seems to have any idea what the Magic do there and it’s entirely possible they basically start from scratch, again. They don’t even have a head coach at the moment after firing Frank Vogel.

It goes without saying that the Magic could badly use a top-three pick and have a potential star to build around (especially if Gordon leaves).

The Magic hope Lil’ Penny will bring good luck to the lottery.

The Suns are rewarded for their truly pitiful season (21-61) with favorable odds to land in the top-three.

A lot of people would have the Suns at No. 1 on this list and I wouldn’t try to tell those people they’re wrong. Phoenix had a -9.4 point differential, two+ points worse than any other team, which is really saying something when you consider how many teams were tanking. The Suns allowed 113.3 points per game, three more points than any other team (a couple of examples of how brutal the defense was, here and here).

The Suns have to be drooling at the thought of being able to draft Ayton at No. 1 or No. 2.

For one, he looks like a potential David Robinson, Joel Embiid-esque talent. And two, the Arizona Wildcats center would give the Suns a local star to boost fan interest.

The Grizzlies went to the playoffs seven straight seasons before the 2017-18 campaign, and went on to have a 22-60 record, good for second-worst in the NBA. Mike Conley only played in 12 games before having season-ending surgery on his left heel, and while they would’ve still been bad regardless, his absence took things to a stunning level of bad.

And that was probably a good thing for Memphis if we’re being honest. This aging core isn’t going to compete for a title, and it was time the Grizzlies realized this and moved on to a full-on rebuild. Being as terrible as they were resulted in the second-best lottery odds and assures them of a top-five pick.

If they were to get the top pick, they should just take whichever player they like most between Ayton and Doncic.

Drafting Ayton may not make much sense on the surface since they currently have Marc Gasol at center, but he’ll be 34 next January. He’s (almost certainly) not going to be on a Memphis championship team, so he shouldn’t be standing in the way of the team drafting the best talent. Additionally, it makes sense to trade Gasol for long term assets anyway, and then they can really accelerate the rebuild with that trade return and their own lottery pick.

Memphis also isn’t a popular destination for free agents and the team has to build primarily through the draft and trades. And teams rarely trade stars, so the Grizzlies will likely have to hit the jackpot through the draft over the next few years. Winning the lottery tonight could be a franchise-saving turn of events for the state of the Grizzlies.