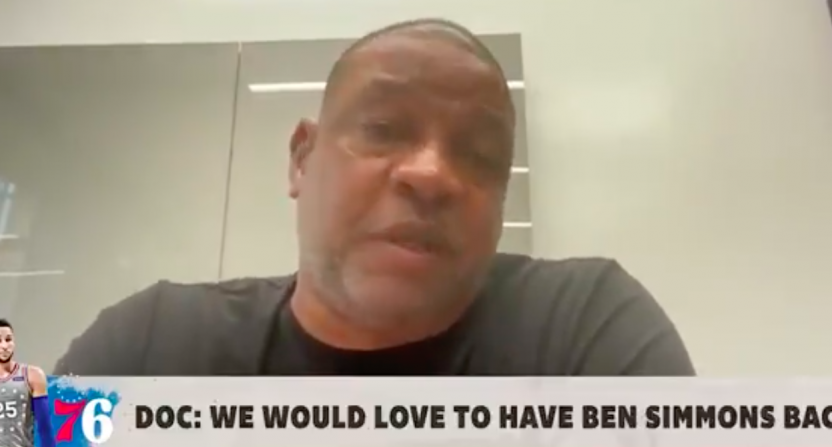 The relationship between Ben Simmons, the Philadelphia 76ers, and their fans was already pretty fraught during last year’s playoff run that ended in defeat to the Atlanta Hawks. However, it was a statement by head coach Doc Rivers following the loss that really seemed to cement the entire affair.

When asked if he felt like the Sixers could win a championship with Simmons as their point guard, he told reporters “I don’t know the answer to that.” Ouch.

"I don't know the answer to that question."

The moment Doc Rivers said this about Ben Simmons, it was over. 😳pic.twitter.com/MXSBvF7OOE

Simmons seemingly close the door for good on Tuesday when ESPN’s Adrian Wojnarowski reported that the guard won’t report for the opening of training camp next week and “intends to never play another game for the franchise.”

We know that the Sixers have been shopping Simmons around to trade but haven’t quite gotten an offer they like, so one would assume that the door is closed and both sides are ready to move on. However, Rivers appeared on First Take on Wednesday and had a very different tune this time around when it comes to Simmons’ viability as a championship-caliber guard.

"We can win a title with Ben [Simmons]. I just believe that."

“Yes, we gotta get him to be better at the free-throw line because, if he does that, that frees up all kinds of other things for him,” Rivers told Stephen A. Smith. “The one thing we did do last year was, we gave him the ball. We put the ball in Ben Simmons’s hands and he led our team. He led us to the best team in the East in the regular season and one game away from the Eastern finals. We can win a title with Ben. I just believe that.”

Rivers was also pretty adamant that the Sixers want Simmons to come back this season.

Doc Rivers on Ben Simmons informing the 76ers that he wants to be traded;

"I can tell you up front, we would love to get Ben back. And if we can, we're going to try to do that. pic.twitter.com/JeWoIE3W7U

“I can tell you upfront, we would love to get Ben back,” said Rivers. “And if we can, we’re gonna try to do that. Ben has a long contract so it’s our hands and we want him back.”

Rivers also tried to clarify his statement after Game 7 that Ben couldn’t be a championship-type guard, saying he was misinterpreted.

“I want to correct that. Because I would love you guys to play what I said…The question was asked about Ben. It was the first question after we just lost a Game 7. My answer was, ‘I’m not answering any of that stuff right now, guys. I don’t even know how to answer that.’ That has nothing to do with what’s about Ben, I was basically just saying I’m not answering that crap, that question.”

Listening back to Rivers’ initial answer after Game 7 and…well, that’s hard to confirm. It certainly does still sound like he’s answering the question specific to Ben Simmons’s abilities. But we suppose it’s possible that he was actually trying to deflect and just didn’t use his words as carefully as he probably should have. Still, it’s a tough pill to swallow, especially watching Rivers’ body language in the video.

Certainly, a lot of NBA fans are having a field day with Doc’s flip-flop on the matter.

As is usually the case with interviews like this, Rivers was performing for an audience of one.

The problem is, that audience has access to the internet as well, and has no doubt seen the full clip.

I get why Doc is going the fake news route, I just don't think it will work. https://t.co/sQRG9uiiMn

Sixers are cooked man, they got Doc Rivers on First Take begging for Ben to come back lmaooooo

It’s a bit strange to see the Sixers put the full-court press on getting Simmons back so late in the process when they had all summer to try to mend the relationship if they really wanted to. If this is how Rivers really felt, why didn’t he respond louder all this time about the misconception? Plus, there’s a lot of people who feel as though the franchise would be better off moving forward anyway.

Perhaps Rivers is just trying to save face or not come off like the bad guy here, but what seemed like a pretty clear break up a day ago now feels a bit muddled. It’ll be interesting to see what, if any, reaction Simmons and his camp have to these revelations.