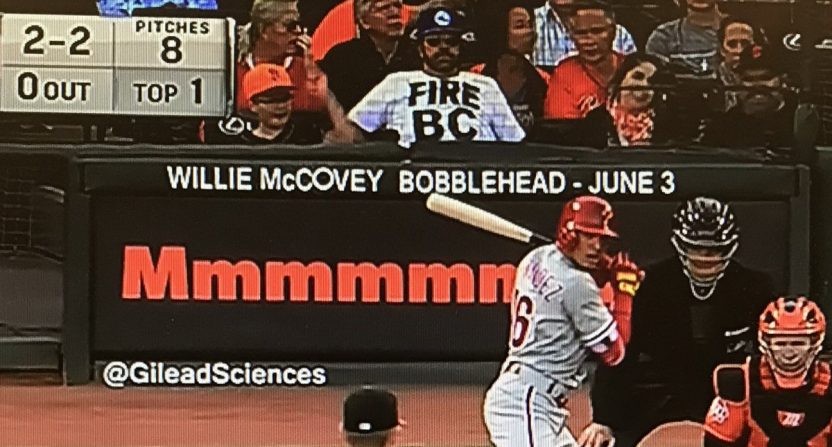 The Philadelphia 76ers have had a rough couple of days with the fallout of the alleged burner accounts being used by general manager Bryan Colangelo. A subject of ridicule while the team conducts an investigation into the situation, one fan sitting behind home plate at Friday night’s between the San Francisco Giants and Philadelphia Phillies at AT&T Park brought his best trolling efforts with a supply of t-shirts featuring custom messages calling out the Sixers.

It all started out with a t-shirt that simply read “FIRE BC,” suggesting the Sixers should part ways with Colangelo before it comes time to work the free agency phones.

OK, not too shabby. Calling out a GM for an embarrassing situation is fair game. But this fan came prepared with a whole wardrobe of shirts to poke some fun at the Sixers.

For the second inning, the message on the shirt changed to “Where is Eric Jr,” a reference to one of the name son a burner account unearthed by The Ringer earlier in the week.

The third inning of the game brought another change in shirt, this time with a not-so-subtle reference to the last two digits of the phone number reported to be attached to the wife of Colangelo. Some internet sleuthing has led to the theory that Colangelo’s wife was potentially responsible for some of the questionable tweeting from suspicious accounts.

If there was any doubt as to where this man’s allegiance lays, this particular t-shirt should make it perfectly clear. He’s a fan f former Sixers GM Sam Hinkie, the architect of the franchise’s now famous signature “Process.”

This same fan was later seen wearing a red Sixers shirt, so we know his heart is still here with the best intentions in mind for his beloved basketball team. But to be able to consistently troll the team and urge them to move on from Colangelo with this many t-shirts is truly commendable.

As of this posting, the Sixers have not fired Colangelo yet, and the team still included a quote from him in a press release announcing a contract extension for head coach Brett Brown.