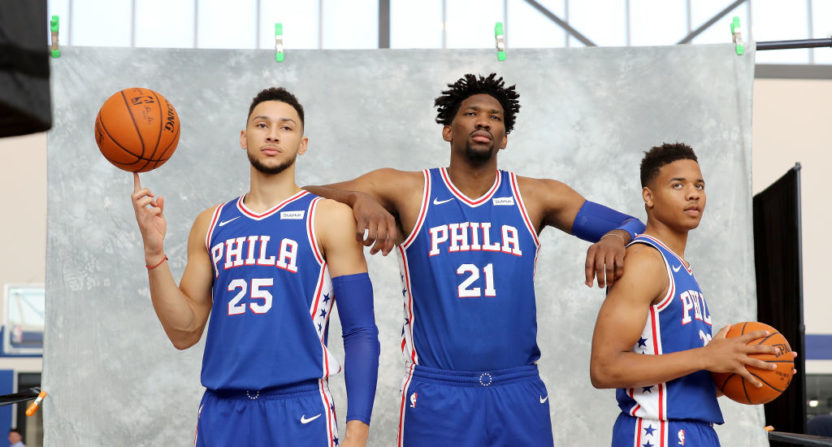 Loyal fans of the Philadelphia 76ers have put up with a lot of crap in recent years while pledging to Trust the Process. They have paid their dues. They have stuck by the team through miserable times. Now, even though it is just a preseason game, those Sixers fans deserve more than ever to get to catch a glimpse of seeing Joel Embiid and Ben Simmons on the court at the same time. Unfortunately, the first preseason game with two key building blocks of the franchise’s master plan will not be televised in the local area.

The 76ers are on the road for their fourth preseason game, this time against the Brooklyn Nets. The Sixers will have no local TV coverage of the game, although the game will be aired by the YES Network. But not many fans in the Philadelphia region are able to get the YES Network, and there does not appear to be any intention or plans to have the game simulcast on NBC Philadelphia or its overflow channel, or on NBA TV. And there is no coverage of the game from either of the NBA’s national TV partners, ESPN and TNT.

Sixers fans are not happy.

Joel Embiid playing tonight and we can’t even see it @sixers ?

It is not uncommon for Sixers preseason games to not be televised in the local viewing area, and this will not be the first preseason game of the year to not have the local TV broadcast team cover the game. But when the game is available through the home team’s broadcast in some capacity, it typically finds its way to the Philadelphia airwaves. Just the other day, the Sixers’ preseason road game at Boston was carried in the Philadelphia area.

No Sixers games aired on tv for the whole season.

Or
Every game is aired but Boston team is only commentary opt.

What makes the lack of Sixers coverage for the most anticipated preseason game of the year even more frustrating is there are no other Philly sports in action to take up the airtime this evening. The Flyers are off after their fourth-straight road game to open the season last night, and the Philadelphia Union don’t play again until Sunday. And it’s not even going up against the Philadelphia Eagles, who play on Thursday night, and the Phillies are not in the postseason.

Instead of a Sixers broadcast on TV, NBC Sports Philadelphia will air a replay of Saturday’s Princeton vs. Georgetown football game. Maybe the Sixers should have saved a little bit on the Embiid contract and found a way to get tonight’s game on the air in Philly.