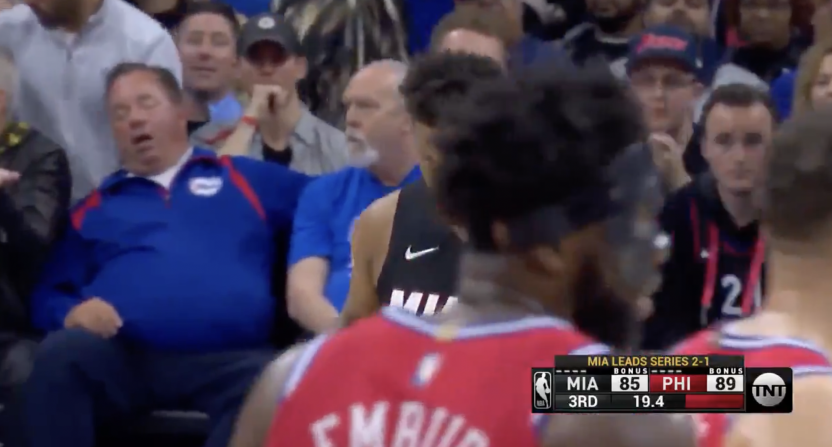 Game 4 between the Philadelphia 76ers and Miami Heat was a back and forth affair, ultimately won by the Sixers, who evened things up at two games apiece. But for one Sixers fan sitting courtside, it wasn’t terribly exciting.

As the third quarter wound down and the Heat tried to close the gap on a four-point deficit, TNT’s cameras picked up a sleeping fan sitting courtside, oblivious to the action and excitement happening on the court.

Wonder if that guy woke up yet… pic.twitter.com/hitEnVMZ51

NBA folks were astounded by the notion that anyone could fall asleep in an arena during a basketball game, especially one played in Philadelphia. And they shared that sentiment on social media.

The roof gets blown off on every single Sixers 3. Should be legitimately impossible to be this out. https://t.co/VcxkqzkYHE

Loud as hell in here I don't know how this is possible. https://t.co/MiedO0f0IG

This is me one hour after my 2nd beer. https://t.co/O1XOld1wdm

Some people identified the sleeping man as a local car dealer who sponsors the Sixers, hence the primo seats. Hard to tell if the incident will hurt car sales or make him more endearing to Philly folks.

He’ll get a chance to redeem himself. With the series tied 2-2, things now move to Miami for Game 5 but no matter what happens they’ll be back in Philadelphia for Game 6. If a series victory is on the line, we think there’s little chance anyone will be sleeping through that one, especially if the game comes down to the wire.

Weirdly enough, it wasn’t the only strange incident involving a Philly courtside fan that evening.