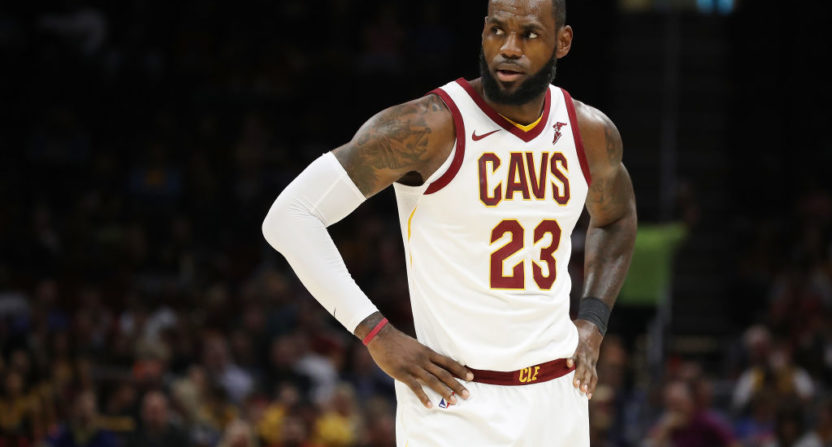 LeBron James is by any evidence a once-in-a-lifetime superstar, already one of the best basketball players to have ever lived. Perhaps the best, although there are few willing to go there with the memory of Michael Jordan’s particular brand of greatness etched into the minds (and shoes) of the generations that make up the current basketball illuminati.

Still, even if you aren’t willing to go there (it doesn’t tend to be worth it for those that do; see Scottie Pippen’s quick backtracking a few years ago), it’s hard to deny his historical greatness. Or at least it should be. To go along with a well-rounded statistical dominance, LeBron has three championships and eight appearances in the NBA Finals, including the last seven in a row.

That’s despite never really playing on an overwhelming favorite; none of his Cavs teams have been favored in the Finals, and only two of his four trips with the Heat featured Miami favored, at least by Five Thirty Eight’s model. (The Thunder series in 2012 was essentially a toss-up.) Yet LeBron has come away with three championships.

LeBron James with the vision! pic.twitter.com/4KqzW31ozH

And yet, despite the fact that for seven years, the only way to make the NBA Finals from the East is to have LeBron on your team, we still aren’t appreciating him. LeBron’s last MVP award was in 2012, and he only has four in total, despite being pretty clearly the best player in the world for at least a dozen years.

There are obviously reasons for that; the MVP is a season-by-season award, after all, and just because LeBron’s had the most sustained success throughout his time in the league doesn’t mean one single player can’t outshine him and deservingly take home an award.

No one would argue against Steph Curry’s two awards, in a vacuum. Russell Westbrook averaged a triple-double last year. And, hey, LeBron gets knocked for a supposed lack of defense for most of the season, which makes sense for preserving his legs and health for the postseason, but can be hard to defend when you’re stacking him up year-by-year against the rest of the best.

But James Harden isn’t nearly the defender LeBron is, and he’s already the odds-on favorite to win this year’s MVP. And it’s hard to argue against Harden deserving it; the Rockets are the story of the league so far, and while LeBron essentially willed the Cavs to a recent 13-game win streak, the Harden narrative is already forming.

Let’s look at some (advanced) numbers:

That’s remarkably close! But barring some kind of miracle, LeBron’s more likely to end up finishing in the top-3 of MVP balloting, while still recognized as one of the best. After all, he’s never finished outside the top 10:

That’s a hell of a run, but it’s also such sustained macro success that it becomes harder and harder to appreciate it in the micro. And maybe that’s okay; maybe, when LeBron gets inducted into the Hall of Fame with, say, five rings and five MVP awards, we’ll look back and think we did enough to recognize his greatness while he was still playing. More likely, though, we’ll wonder what the hell we were thinking not giving LeBron more MVP awards.

Just one more thing he’ll have in common with Michael Jordan.