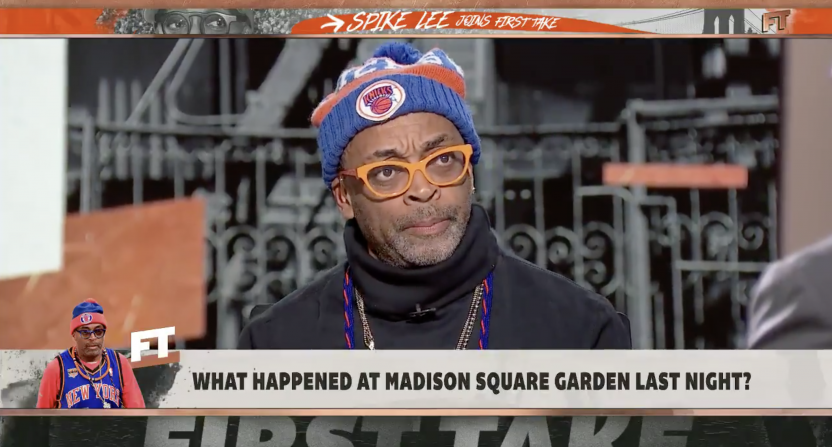 Whether it’s due to reputation or because it was a serious issue, an incident that could’ve been resolved with minimal issue turned into a huge thing because the New York Knicks have a history of being completely dysfunctional.

This time, the target was Spike Lee. The critically acclaimed filmmaker is one of the most famous and diehard Knick fans, showing up courtside at Madison Square Garden for over 30 years. So Spike has certainly spent a lot of time (and a lot of money) sitting through some bad stuff in support of his team.

Anyway, an incident occurred when there was a disagreement on an entrance Lee used to enter MSG. People heard him mentioning Charles Oakley, who had his own incident with the Knicks, but Spike was able to sit in his courtside seat and was seen talking to team owner James Dolan at halftime.

Spike was on First Take and told his side of the story and while things eventually subsided, things got a bit testy and he gave his point of view.

Lee explained that he had been using the 33th Street employee entrance to enter MSG for over 20 years and was doing the same last night. For VIP’s and celebrities, using a private entrance isn’t exactly surprising.

This is when people started noticing something was going on. The first confrontation was away from the public but this second meeting is in front of many people. Lee pointed out that he wasn’t leaving and coming back in to the other entrance because one, he’s already got his ticket scanned to enter the arena. And two, that they don’t allow re-entry after leaving so he didn’t want to risk not getting back in. Which if you think about it, MSG personnel are telling Spike to violate one rule by trying to leave and re-enter in order to fix the original rule violation.

After Lee refused, he said he was told, “We want you to leave the Garden.” Lee then said, “I put my hands behind my back and I said, ‘Arrest me like my brother, Charles Oakley.” Eventually things got settled and Lee got to go to his seat but at halftime, James Dolan wanted to talk to him, which Spike wasn’t in the mood but let him know that if a policy had changed, he would’ve appreciated some warning about that. Spike said, “When my deposit’s due…and I’m one day late, my phone is ringing off the hook.”

We all know an arena has the right to eject someone but this honestly shouldn’t have escalated to this point. Would it have hurt to skip the whole “We want you to leave and re-enter” thing and go to the James Dolan “We need to have a talk” thing if this was that big of a problem. I’m not saying Spike Lee is entitled to special treatment because he’s a celebrity but he’s a big enough fan for the owner to come over and have a talk if this was that big of an issue. That would’ve at least saved a lot of bad press and gives the media a little less content because no matter how much the Knicks feel they’re in the right about this, they aren’t winning this PR battle.

Spike Lee's response when finding out he spends roughly $300K a year on Knicks tickets and has given them almost $10M over 30 years:

The First Take crew did some quick math and determined that Spike has spent nearly $10 million on the Knicks over the years. That’s not to say he should break the rules whenever he wants but he did say two things that are true. One, “Preseason’s a scam, too.” And two, when told how much he’s spent, “I look stupid now.”

That’s the price of fandom. We root for some pretty terrible teams sometimes and aren’t really sure why we stick with them but we do it anyway. Keep up the faith, Spike. Maybe the Knicks will someday turn it around.