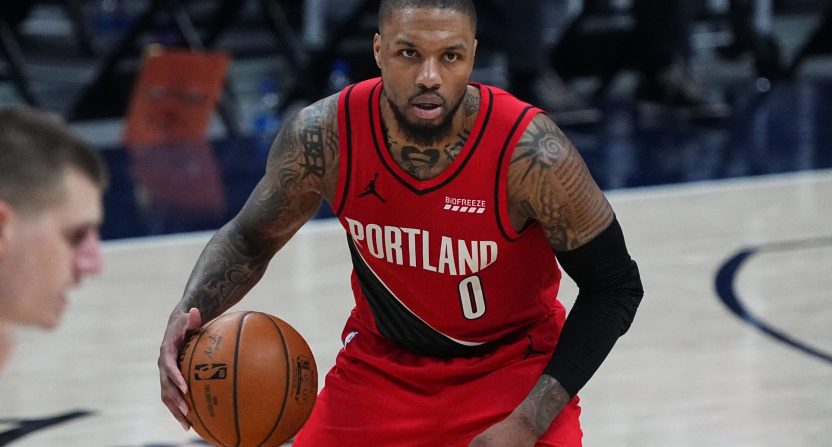 It’s been a somewhat open secret that Trail Blazers point guard Damian Lillard has been frustrated in Portland. A fourth first round exit in the last five years combined with a reported disapproval of the hiring of new head coach Chauncey Billups, it has seemed more and more likely Lillard would be looking for a way out.

That time may have come as True Hoop’s Henry Abbott reported that “a source close to Lillard says that in the days to come, he plans to request a trade.” It should be noted that Lillard’s teammate, Jusef Nurkić, has been very much denying Abbott’s report and that The Oregonian has a source that says Abbott’s report is not true and that Lillard is not planning to request a trade. Lillard will be addressing those reports in his media availability with Team USA on Friday.

Nevertheless, whether Lillard plans to request a trade or not, it’s gotten social media reacting and wondering where the 31-year-old might possibly play next.

LeBron walking up in the Lakers facility after hearing Damian Lillard may request a trade pic.twitter.com/dC8THfEO9s

Lots of Lakers fans at the USA-Argentina game in Las Vegas making their personal pitch to Damian Lillard to join their team from the stands.

Source: I would like Damian Lillard to play for the Lakers next season.

LeBron James and Anthony Davis knowing they about to get Damian Lillard for Kyle Kuzma, Montrezl Harrell, A Lakers fleece blanket, and a Staples Center season ticket pic.twitter.com/xQYXd4SYpH

If Damian Lillard truly does request a trade, I'm out. Need a break. Not supporting this shit anymore.

Per a source close to @canishoopus, Damian Lillard is “aware they exist” when it comes to the Minnesota Timberwolves.