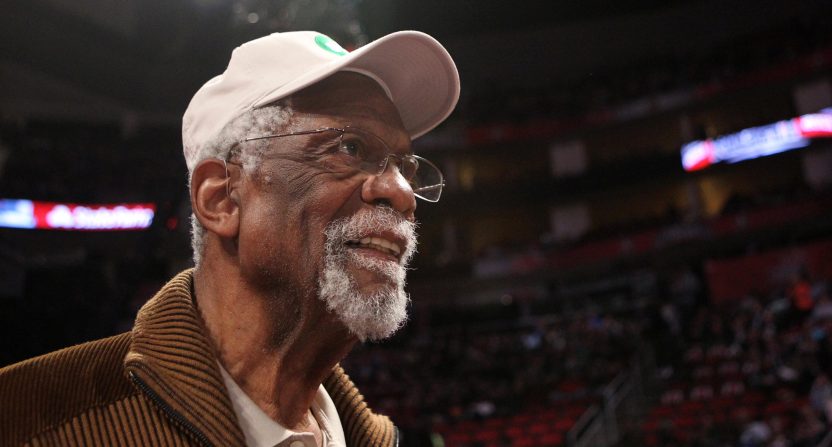 The sports world was shocked Sunday afternoon with news of the passing of Bill Russell. Russell, one of the greatest champions in both the game of basketball and the battle for civil rights, passed away at the age of 88 with his wife by his side at their home in Washington State. Here’s how that news was announced on Russell’s Twitter account.

Despite not possessing the scoring prowess of his rival Wilt Chamberlain, Russell simply cared about one thing: winning. And he did a ton of that during his time with the Boston Celtics, winning 11 championship rings, including eight consecutive titles. Although Russell never won a Finals MVP (since the award wasn’t handed out until 1969), the accolade was later named in honor of the legendary big man.

With Russell (seen above at a NBA All-Star Weekend event in 2013) being one of the greatest sports figures in America, his passing naturally drew a wide array of reactions across social media. Those were seen from noted Boston fans Bill Simmons and Dave Portnoy, media figures like ESPN’s Stephen. A. Smith, Celtics’ superstars Jayson Tatum and Jaylen Brown, and more.

One of the most important athletes who ever lived. And one of the greatest. RIP.

Thank you for everything! R.I.P Legend 🙏🏽 pic.twitter.com/tn2iGsArav

My deepest condolences to the family, loved ones and the @NBA community on the loss of the greatest champion we’ve ever known: BILL RUSSELL. An activist, a pioneer, a humanitarian. He made the world better for us all.#RIPCHAMPION

One of my favorite Bill Russell moments… RIP Legend 💔pic.twitter.com/A7VBRpjUZ0

Rest In Peace 🕊thank you for paving the way and inspiring so many Today is a sad day but also great day to celebrate his legacy and what he stood for 💚 pic.twitter.com/kvDaIsjpGG

MLB’s Boston Red Sox also held a moment of silence for Russell at Fenway prior to their home game against the Milwaukee Brewers.

NBA commissioner Adam Silver released a statement following Russell’s passing, calling him the “greatest champion in all of team sports.”

During his career, Russell helped fight for change during the Civil Rights Movement and beyond. He often spoke about the racism he experienced firsthand in Boston. The Basketball Hall of Famer also became the first black head coach in NBA history as a player-coach for the Celtics from 1966-69. He went on to coach the Seattle Supersonics and Sacramento Kings.