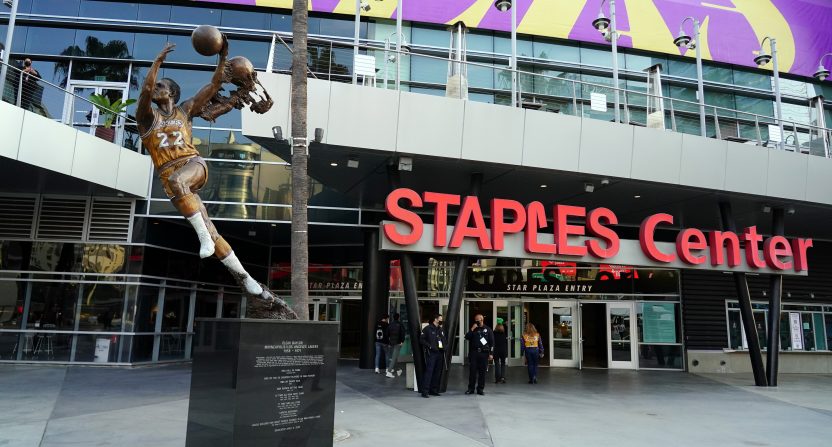 The news broke late Tuesday night that Staples Center is getting a name change. The new name? Crypto.com Arena, named for a cryptocurrency platform and exchange out of Singapore. The naming rights deal costs, according to Axios.com, over $700 million and lasts for 20 years.

Staples Center – the iconic home of the Los Angeles Lakers and Clippers among others since 1999 – will have a new name beginning Dec. 25: https://t.co/lur8Hbuv0r Arena. It’s believed to be the largest U.S. venue naming rights deal to date.

It’s stunning news for various reasons. First, the arena, which was built in 1999, has only ever gone by Staples Center and the name has come to represent the teams that have called it home, including the NBA’s Lakers and Clippers, the WNBA’s Sparks, and the NHL’s Kings.

Second, it’s a huge move for a cryptocurrency company at a time when many people remain skeptical of the monetary system, signaling that they don’t believe it’s going anywhere.

And third, it just sounds like a really dumb name. The kind of arena or bowl game name we stopped doing in the early 2000s. We suppose people will get used to it, or start calling it The Crypt or something like that, but it really sounds goofy right now.

And naturally, Twitter was full of jokes and comments about the name and what it could mean moving forward for the teams that play there (though the Clippers will be leaving soon enough). Not to mention how many people out there really seem attached to the name Staples Center, which is itself a naming rights deal.

"Welcome to the Crypt!" is a little on the nose given the age of the Lakers roster https://t.co/mIn32RPgPa

the lakers removing their old name off the arena pic.twitter.com/fDAXDqpRzA

A crypto company has bought the naming rights to the Staples Center for a record breaking price tag of SEVEN monkey pictures.

Lots of Los Angeles fans have been saying that they refuse to call it anything other than Staples Center, and it’s probably going to be quite the transition given how it’s only ever been known as Staples Center. But arena names change all the time around the country and, while it might seem weird and dumb, Crypto.com Arena appears to be here to stay.