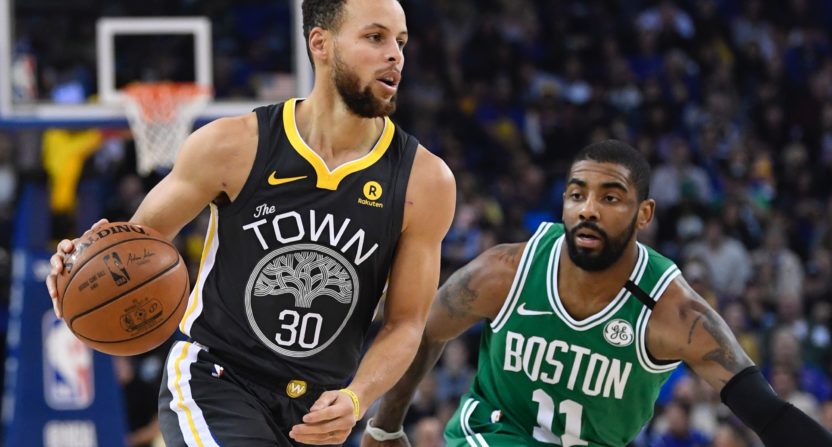 Saturday night’s marquee NBA matchup featured the Celtics traveling to Oracle to take on the Warriors, and the contest between the current #1 seeds in the East and the West didn’t disappoint. Tied at 95 with under 2 minutes to go, it was a fascinating possible Finals preview; that the Celtics were able to hang around despite playing without Marcus Smart (hand laceration due to art hatred) was very impressive.

Then, after Kevin Durant took and missed a contested jumper, Steph did Steph things, scoring 13 of his 49 points over the final 1:45 (and 13 of Golden State’s final 14 points) to hold off the very game Celtics.

It started, as Curry scoring runs typically do, with this sort of demoralizing make:

As Curry was bringing it up the floor there, I said to my laptop screen “He’s just going to pull up and hit a three.” And then he did! Everyone knows it’s coming, but he’s kind of broken the game, in an entertaining fashion.

After the three, Kyrie came back down in attack mode, but it didn’t end up going well:

From there, Boston was forced to foul on every Golden State possession, but the free throws weren’t without pressure; the Celtics continued to score on the other end (Irving was fantastic, going 13-18 for 37 points), and after Curry hit two Terry Rozier pulled off a ridiculous shot out of a timeout:

But after that, Curry simply kept making free throws; he extended the lead back to three following the Rozier make, and then the Warriors fouled Kyrie to prevent a possible game-tying 3-point attempt. Kyrie made the first and tried to miss the second intentionally, which didn’t go well:

In the end, it didn’t matter whether the ball grazed the rim or not (though it looked like it did), as it simply shot out of bounds before anyone had a play on it anyway. Two more Curry free throws and that was pretty much the game.

(An aside: in 7th grade, I was playing intramural basketball, and our team was down two. I attempted to miss it intentionally, but I didn’t know it had to hit the rim, so I just hurled it as hard as I could off the backboard to myself. The guidance counselor/ref apparently didn’t know the rule either, or else he just admired the effort, so he let play continue. I missed the resulting jumper. We didn’t win a game all season.)

Given the Cavs struggles, this really could be a Finals preview, and based on tonight it’d be a very fun series. Brad Stevens and Kyrie Irving is a very good combination; the scheme and plan probably won’t break down often, but when they do, there aren’t many better players when it comes to getting freelance buckets. The Celtics are still swearing Gordon Hayward won’t be back this season, but just imagine if Hayward manages to pull a Kyle Schwarber and return late in the year? Even just as a spot-up option in limited minutes, he could change the dynamic greatly.

But that’s probably a pipe dream, and there’s a chance both of these teams stumble in the conference playoffs. (More a chance for Boston, probably, but Houston is really good, and the West can always be crazy.)

If we do get this matchup, though, it should at least be fun basketball, and there’s nothing better than that.