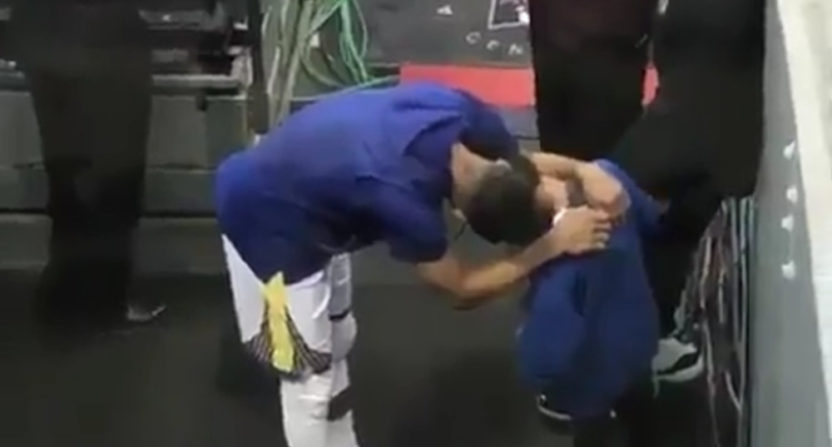 The Dallas Mavericks and Golden State Warriors had some confrontational moments on the court in Golden State’s 133-103 win Monday, especially with Mavericks’ coach Rick Carlisle taking exception to a self alley-oop from Warriors’ forward Jordan Bell. Before the game, though, Warriors’ point guard Steph Curry took time to visit with Mavericks’ point guard Devin Harris’ nine-year-old nephew Brayden. Brayden’s father (and Devin’s brother) Bruce passed away Thursday from injuries sustained in a car accident. Curry spent some time praying with Brayden ahead of the game:

Stephen Curry praying pregame with a kid who lost his father due to a car accident. ?????? pic.twitter.com/Fdn0C0OM0r

As per Eddie Sefko of The Dallas Morning News, Curry also gave Brayden some autographed items and spent some further time with him. Devin Harris, who didn’t play Monday, told Sefko that it’s a hard time for him, Brayden and the whole family right now, and that he brought Brayden to the game to try and help him think about something else:

It was the first time Harris has been at the arena since his brother, Bruce Harris, died on Thursday from injuries suffered in a car wreck.

“I lost my brother tragically and it’s been a tough week,” Harris said to several media members in the Mavericks’ locker room with his nephew at his side. “The family is taking it pretty hard, as you would expect them to. Probably the toughest thing I’ve had to deal with, dealing with myself, trying to explain it to his kids, my kids – it’s just been tough.”

Harris did not play against the Warriors. He said he has no timetable when to return to work, but will do so when the time is right.

In the meantime, he said the time was right to be with his extended family – his teammates.

“I can only sit in the house for so long,” he said. “And these are my brothers, too. I spend every day with them, so just to be able to be around them has to be a healing them for me as well.

“I came to spend some time with my nephew to try to get his mind off of it.”

Harris’ teammates and Mavericks’ owner Mark Cuban provided plenty of support for Brayden and his family as well, but it’s particularly cool to see Curry, a player on the opposing team, take the time to comfort Brayden this way and hang out with him. That’s going above and beyond, and hopefully it was some help to a kid in a very tough situation.