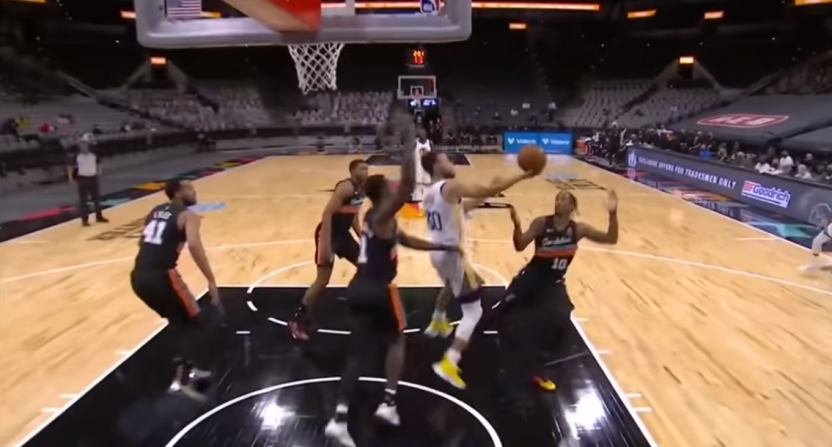 Nobody has an assortment of circus and H-O-R-S-E shots like Steph Curry, but the Golden State Warriors’ star is usually shooting those from deep range. In the Warriors’ 114-91 win over the Spurs, Curry made what’s quite possibly the most ridiculous close-range shot of his decorated NBA career.

In the first quarter, Curry drove to the hoop in traffic, and made a Jordan-esque layup with his back to the basket, while getting fouled. This is an absolutely insane play:

Curry had a game-high 32 points and has been playing like two-time NBA MVP self lately. He’s averaging 37.4 points per game in February, and has made at least four threes in 12 straight games, tying the second-longest streak in NBA history.

That ties the 2nd-longest streak in NBA history and ties the longest run of Curry's career. pic.twitter.com/KFVoYwsFYY

Many NBA evaluators thought the retooling Warriors would have a very rough season after losing Klay Thompson to injury, but Curry has led Golden State to a 13-12 record that would currently have them in the playoffs.