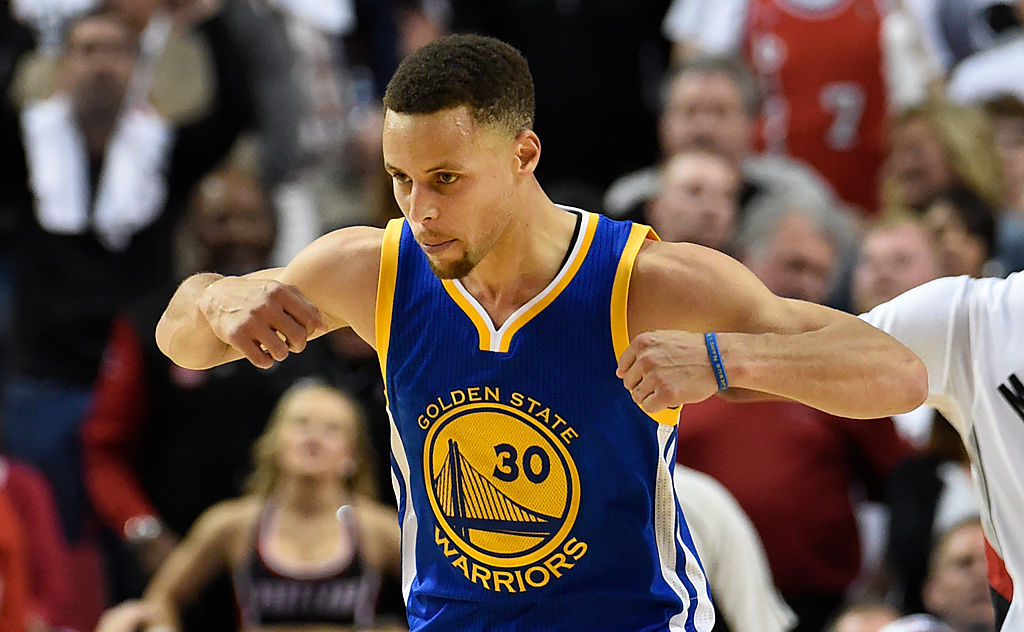 There’s been a lot of noise about Steph Curry the past three weeks. It’s been a field day for open debate on radio and TV talk shows — Do the Golden State Warriors sit him? Do they play him, do they start him, do they need him?

With no Steph to watch, the conversations started to push the actual Steph out of our minds. We couldn’t really remember all of the Steph experience, only fragments of it.

I’m not talking about just fans here. No less an NBA expert than Jeff Van Gundy got so caught up in Damian Lilliard’s Game 3 performance in the series between the Trail Blazers and the Warriors that he speculated — on TV — that Lilliard and Curry were basically interchangeable.

Having done a lot of live broadcasting, I understand there are things that come out of your mouth that shouldn’t, so I forgive Van Gundy. However, after Curry stole a basketball game from Lilliard and the Blazers in Game 4, Jeff might not forgive himself.

Jeff Van Gundy had something very interesting to say about Damian Lillard and Steph Curry https://t.co/vJ32tabGQv

It’s not just Jeff Van Gundy. It’s all of us. It’s amazing to admit it, but as a guy who has written about the Warriors at Crossover Chronicles for two breathtaking seasons, I did it too.

I forgot how damn good Steph Curry is at basketball.

Isn’t that crazy? After all, the numbers didn’t go away. The 50/45/90 season, the 402 3-pointers (first to ever have 300 in a season), the first NBA player ever to lead the league in both scoring and steals. It’s all still there. Yet having gone 23 days without having seen him do his thing, the impact of Curry became fuzzy in our minds.

YOUR SOUL IS MINE https://t.co/VnRTqqialo

There will be so much written and said about the fourth quarter and overtime of Golden State’s 132-125 win over Portland, and it all should be. It was electric, seeing Curry pull up and hit threes from anywhere, just like the old times 23 days ago. But I want to hit on something else.

He saved the Warriors in the very first quarter.

If you only saw highlights, you missed this, because no highlight show in the world has enough time to show you everything that happens in a game like this.

The Warriors trailed 8-2. No big deal.

Hey Steve, put Steph in! That should do it!

Then they trailed 21-5 with five minutes left in the first.

Uh-oh. Curry’s already in. Now what?

While Curry was anything but smooth, his very presence was a calming influence on his teammates. They outscored Portland 13-5 the rest of the quarter, salvaging what could have been a disastrous start that might have made Curry’s return to the lineup a moot point. Curry had only four points, an assist and a couple of rebounds at that stage of the game, but he had made an impact on the defensive end.

The second quarter was very strange, with both coaches employing intentional foul strategies that weren’t altogether successful. Both teams shot 14-of-19 from the line in the quarter, and Steph was still getting his bearings. The Warriors cut their deficit to five at one point, but by the time the buzzer sounded for the intermission, the Blazers had rebuilt a 67-57 lead.

In the third quarter, the Warriors made their move. Curry, forced to play much more than expected due to the ejection of Shaun Livingston, was starting to do Steph-like things. He was trying threes every once in a while, and missed all four (he missed his first nine triples on Monday), but collected a couple more rebounds and dished out three more assists. When the quarter was over, the Warriors trailed by just one point, and Curry was +11.

Not sure what Aminu was doing to start, but man is this a ridiculous tough shot by Klay. https://t.co/H0viItLh4T

Here’s what gets lost: Klay Thompson had taken only one 3-point attempt in the first half. He and Curry shared the floor for just a few minutes because the rotations were unusual. Curry hadn’t come off the bench in years. In the third quarter, starting alongside Curry after Livingston’s ejection, Klay hit four of seven three-pointers in the quarter. Two were assisted by Curry, the other two by Draymond Green. Curry’s mere presence on the floor creates space for Thompson, and he helped shoot the Warriors back into the game.

The focus for most observers — paid and unpaid alike — will remain on the fourth quarter, in which Curry finally hit a couple threes and threw a great pass to Harrison Barnes for a tying 3-pointer with 51 seconds left. It was a great display, of course, and it set the stage for that record-setting overtime.

Stephen Curry's 17 points in OT are the most ever scored in overtime of ANY game (regular season or postseason) pic.twitter.com/f2y089uOGZ

Just don’t forget: The comeback started for the Warriors well before that, when Steph came into the game in the first quarter and righted the ship.

What happens with Curry from this point? I wouldn’t be shocked to hear that he might not play Game 5, although Steve Kerr jokingly announced to the media after the game that Curry would be starting Wednesday. That knee encountered a lot more stress in Game 4 than the organization thought it would, and it could look like a grapefruit on Tuesday. The Warriors will likely be conservative again, believing they can beat the Blazers without Steph playing extended minutes. They have to remember that Kyrie Irving’s knee got re-injured against them — in Game 1 of last year’s Finals — by playing overtime minutes after a long layoff.

Later on Tuesday, Curry will receive his second straight MVP award. Unlike last year, when there were a few delusional Rocket fans who thought James Harden should be in that conversation, the only question is how many knuckleheads will vote for P.O.S (People Other than Steph). Whatever that number is, Curry showed again in Game 4 that he is a transcendent talent who takes a very good team, loads it on his back, and makes it great.

That’s what the MVP does.

We needed that reminder after Steph Curry spent the past two weeks in non-basketball attire, removed from our lives. Steph re-entered our lives Monday night, and we were reminded as lovers of basketball how much richer we are for his presence.