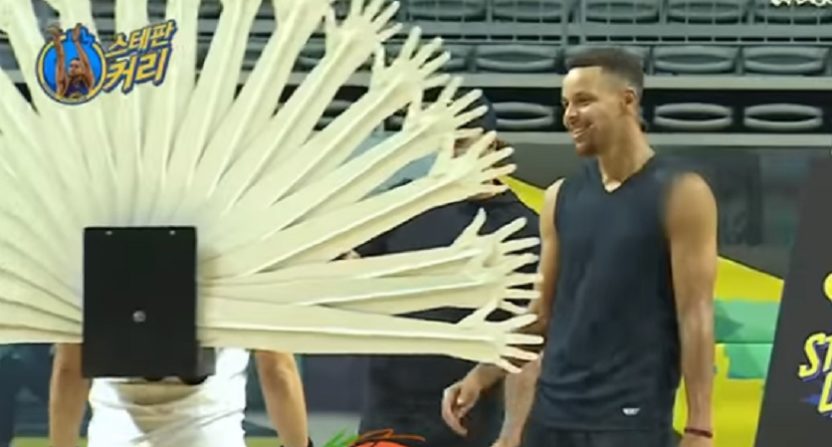 If the NBA ever needs some new ideas for All-Star Weekend activities, the league might want to consult Korean television. Infinite Challenge is a popular Saturday night variety show in South Korea and recently welcome NBA superstar Steph Curry as a guest.

Naturally, the hosts of the show wanted to face Steph and his brother Seth in some pickup basketball. But the producers had something more fun in mind than just a basketball game with a few gimmick shots. Infinite Challenge has its title for a reason, and wanted to present the two-time MVP with some obstacles unlike any he’s faced on a NBA court.

For instance, how about the Curry brothers playing the Infinite Challenge hosts in a game of 2-on-5? No problem, with Steph employing tricks like hiding the ball under his shirt.

Other challenges included the home team shooting on a hoop that was at least three times as big as a standard basket and the Currys having to score on a goal that spun around clockwise.

Could Curry make his way around a defender with approximately two dozen hands? How about an inflatable rim protector sitting atop one host’s shoulders that towered above the backboard?

Even with 20 extra arms, that guy probably needed a bit more wingspan to frustrate Curry. And as tall as the giant inflatable defender was, he couldn’t move his feet very well. Curry was impressed by the inventiveness of the show, however, asking “How do they make this stuff, bro?”

Ultimately, as is often the case in NBA competition, opponents simply have no answer for Steph Curry’s range. No matter where he is on the floor, he’s a threat to score. Put multi-arm defenders in front of him or inflatable giants near the rim and Curry will simply shoot over them, even from half-court. And in this game, those shots were worth five points. The man just can’t be stopped, no matter how many goofy obstacles are presented.

The Currys seemed to have a lot of fun playing Infinite Challenge and the creativity that the show produced for them. We definitely don’t have anything like this in the United States, though maybe NBA TV or one of the league’s TV partners, like ESPN and Turner, could consider something like this for offseason programming once the Summer League ends. Or maybe it’s just better to tip the creative cap to international countries who can make much more of a spectacle out of NBA superstars visiting.

Still, it might be fun to see NBA players wearing multiple arms or giant, inflatable defenders on their shoulders during an All-Star Game. Just once. Or even just for one quarter.

Steph Curry with the greatest play in basketball history on @realmudo pic.twitter.com/4nXo86lrQF