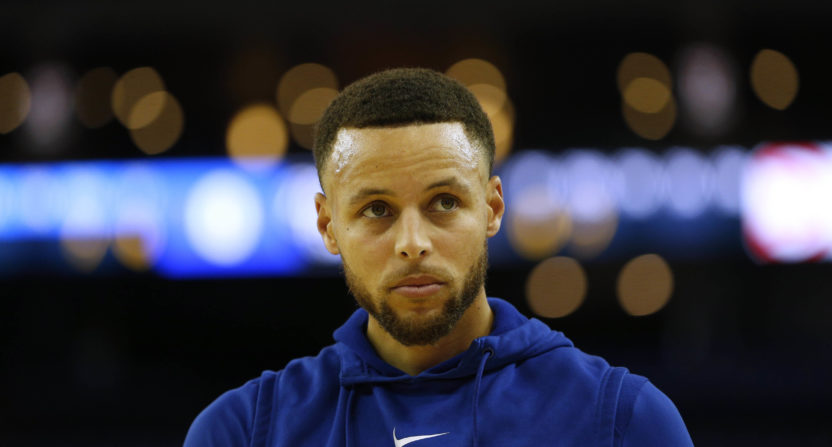 When Steph Curry fell to the ground clutching his left knee Friday night (thanks, JaVale), Warriors fans everywhere saw the championship they had all but counted on flash before their eyes. Yes, Golden State would have a stacked team even without Steph in the lineup, but losing the two-time MVP for the playoffs would make a potential conference-finals matchup with the Rockets awfully scary.

Well, it seems Northern California can exhale just a bit. On Saturday, ESPN’s Adrian Wojnarowski reported that Curry suffered only a Grade 2 MCL sprain and will be reevaluated in three weeks. That would reportedly put Curry on track to return early in the playoffs, before a potential clash with Houston.

Steph Curry suffered a Grade 2 MCL sprain in his left knee, league source tells ESPN. He will be re-evaluated in three weeks. He could return near start of playoffs. All in all, good news for the Warriors.

There are two ways to look at the wave of injuries that has swept the Warriors in recent months. An optimist would say that although Curry, Kevin Durant (fractured rib), Draymond Green (pelvic contusion) and Klay Thompson (broken thumb) are all sidelined at the moment, Durant hopes to be back by the start of April, Green could return as soon as Sunday and Thompson’s issue is not considered particularly serious. Assuming Curry recovers on schedule, the quartet of All-Stars should all be ready for the meat of the playoffs.

A pessimist, on the other hand, would point out that these injuries have already likely cost the Warriors a shot at home-court advantage over the Rockets, while worrying how many of these issues could linger deep into the postseason. Every team is beat up by playoff-time, but if Golden State is particularly battered, the results could show against a strong opponent.

But ultimately, there’s not much the Warriors can do right now besides getting everyone healthy for May and June. That means, as our Matt Clapp suggested last week, it’s probably time to bubble wrap some stars.