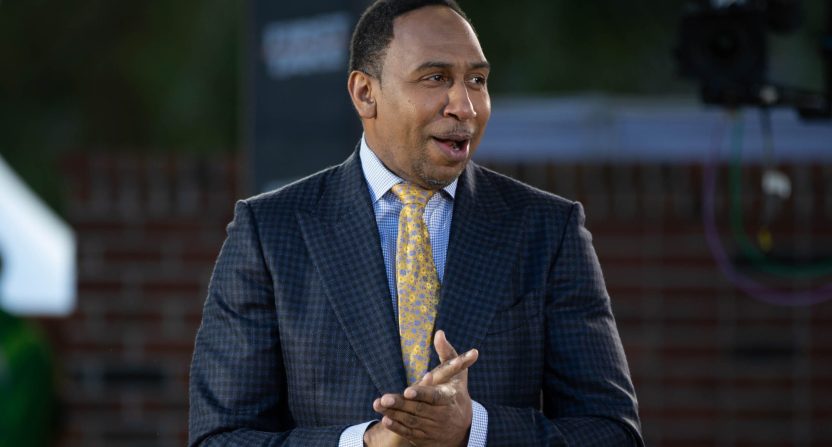 In a way, it felt inevitable that either Stephen A. Smith or Skip Bayless would eventually say that the Los Angeles Lakers should trade LeBron James. It was really just a matter of which hot-take artist got there first.

ESPN’s Smith is the big winner in the spicy take sweepstakes as, on Wednesday, he explained why he thinks the Lakers, coming off a miserable season, should trade the most iconic player in the NBA.

“I think the Los Angeles Lakers should strongly consider trading LeBron James,” said Smith. “It’s what I believe. Now, a lot of people are going to lose their minds because the brother is 37, in his 19th year and he just averaged 30 and all this other stuff. If the team was better, he’d have been the league MVP candidate without question. This is not throwing a speck of shade at LeBron James in case he’s watching, which he’ll try to deny it, but he’s watching. OK, I’m telling you right now, it’s no shade at all. It’s a testament to his greatness and it’s a compliment to him.”

To be fair, Smith isn’t exactly going out on a massive limb here and he’s not the first person to put forward this idea. But the idea that the Lakers would make this move is silly, especially when it’s fairly well documented that LeBron isn’t going anywhere that LeBron doesn’t want to go. If James ever does get traded, it’s because he decided to make it happen.

LeBron has said that he does want to play with son Bronny James if and when he’s drafted in the NBA, but that’s a few years off.

In the meantime, there were plenty of spicy reactions to this spicy take around the NBA world.

Even if it might be the right basketball move, the notion that the Lakers could trade LeBron anywhere just because he doesn’t have a no-trade clause is totally antithetical to how they operate. They want to be a destination for the next wave of superstar FAs, too. https://t.co/eyBENzN57I

He should be punished, trade him for a bag of Doritos to a bad team like San Antonio! https://t.co/tiyIGlcNdd

They’re still talking about a team that didn’t make the playoffs?? 🤦🏽‍♂️ https://t.co/28cSawCH6D

One ownership group estimated that employing James would generate roughly $65 million annually for any team that signed him.

One study estimated that LeBron would create just below $400 million in value for the Los Angeles economy over five hypothetical seasons with the Lakers. https://t.co/HzHEgKxaQd

You really just be saying anything for attention, I remember when u were respectable https://t.co/Rz4HRlm4tb

Now we wait to see if LeBron, like Kevin Durant, does indeed react to SAS’s comments. If he does, Smith will have gotten exactly what he wanted.