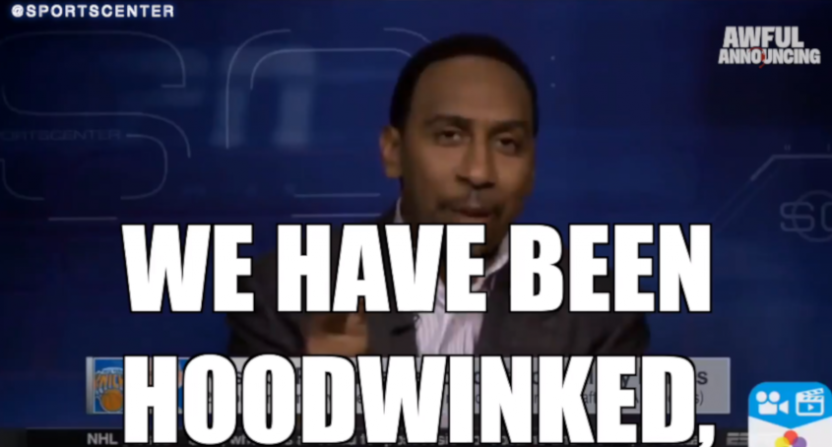 Earlier this month, in response to documentaries about the ill-fated Fyre Festival and his role in it, rapper Ja Rule sent out a tweet of “I too was hustled, scammed, bamboozled, hood winked, lead astray!!!” It turns out that that language is incredibly familiar, as it first comes from a Malcolm X speech (popularized further in Spike Lee’s 1992 film). It’s also shown up in sports more recently, with ESPN pundit Stephen A. Smith using almost the exact same wording in a 2015 rant after the Knicks drafted Kristaps Porzingis fifth overall. With Porzingis actually turning out to be good, and then being surprisingly traded Thursday, it’s a good time to look back at what Smith said on SportsCenter in 2015 after that draft:

Here are Smith’s full comments there:

“Let me be very, very clear … the kid [Porzingis] is talented .. and in three to five years, he may very well be big-time … but … this is about now. Because when you look at the fact that Phil Jackson picked this individual, you’re talking about a project. Phil Jackson and the New York Knicks passed up on four dudes who are NBA-ready now … And why did you do this? You did this because of some dude who may or may not be ready in two years?”

…“New York Knick fans were at the Barclays Center booing because we recognize that we have been hoodwinked, bamboozled, led astray, run amuck, and flat out deceived by Phil Jackson and the New York Knicks. That is the situation.”

As a reminder, Porzingis and first-overall pick Karl-Anthony Towns are the only players from that draft to have made an All-Star Game so far. Second pick D’Angelo Russell, third pick Jahlil Okafor, fifth pick Mario Hezonja, sixth pick Willie Cauley-Stein, and seventh pick Emmanuel Mudiay are amongst those who haven’t accomplished that feat. So while there are always things to criticize the Knicks over, this was a case of them actually drafting very, very well despite Smith’s inferno-level take. To Smith’s credit, though, his Porzingis opinions changed even during Porzingis’ first season (which was in the fall of 2015, not “in two years”):

Update: This post has been corrected to include Malcolm X originating this quote.