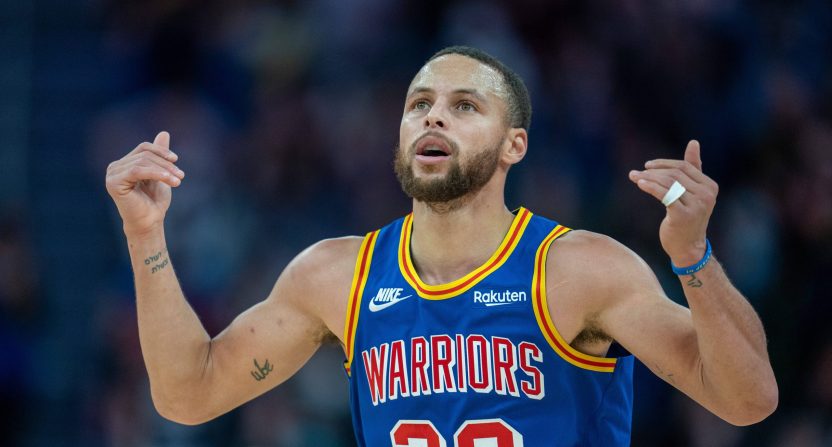 The Golden State Warriors won their final five games of the NBA regular season, securing the three-seed in the Western Conference.

With the NBA play-in tournament set to start on Tuesday, the Warriors are one of the few teams who know for sure who they will be playing in the playoffs. They will take on the Denver Nuggets, led by many people’s pick for MVP this season, Nikola Jokic.

There is some uncertainty heading into the postseason for the Warriors, however. They have been without star point guard Stephen Curry since March 16 when he sprained a ligament in his left leg against the Boston Celtics.

NBA insider Shams Charania reported Tuesday that Curry may return to team practices this week, but that his status for game 1 of the team’s series against the Nuggets is uncertain at this point.

Warriors say Stephen Curry (sprained ligament, bone bruise in left foot) may return to full team practices this week and his status is undetermined for this weekend's Game 1 vs. Nuggets.

This is obviously not great news for the Warriors, who certainly need to get Curry back if they want to make a deep playoff run, much less get by the Nuggets in the first round.

This news is obviously hard to interpret, as it appears that it is a 50/50 chance for Curry to return for game 1. Despite this, many around the NBA world still seem certain that Steph will be back in time.

The Chef is close https://t.co/e8q9QfwxSH

“Undetermined” that boy playing man save the theatrics https://t.co/OYA6lB4CPi

This week determines the season for us 🙏🏽🔥 https://t.co/VCIje74zfr

When Curry has been on the court for the Warriors, he has been his usual self, averaging an impressive 25.5 points on the year.

This Warriors team could be even more dangerous than some of past seasons thanks to the emergence of players like Jordan Poole, who have given Golden State a very reliable source of scoring off the bench.

If Curry is good to go this postseason, it’s reasonable to expect a long playoff run for the Warriors.