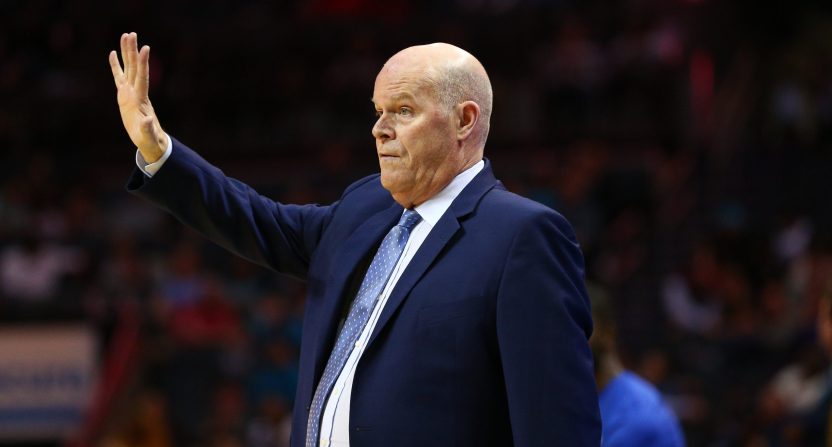 After being spurned by Kenny Atkinson, the Charlotte Hornets have found their new head coach in one of their old ones.

Adrian Wojnarowski of ESPN reported on Friday that Steve Clifford, who coached the Hornets from 2013-2018, will return.

ESPN Sources: Steve Clifford has agreed to a deal to return as the Charlotte Hornets’ coach. Clifford, one of league’s most respected coaches among his peers, led Hornets to two playoff trips in a five-year run that ended in 2018.

To say that the NBA world was generally unimpressed by the hire would be a vast understatement.

The sports town of Charlotte is under siege. https://t.co/5i0xTtSsFJ pic.twitter.com/xOlKOUPw5x

It sounds like a nightmare but it’s really just another day at the office for the Charlotte Hornets https://t.co/JcZTTXGY7t

This is the most hilarious result https://t.co/x7hEKeMHQb

Huh? What happened with Mike Dantoni? How did he go from finalist to out? And what’s with these ill-timed Friday night news dumps by #Hornets ?? https://t.co/Jxr4ljErfj

Clifford’s enjoyed some success as a head coach. During his first stint as Charlotte’s head coach, he made the playoffs in two of five seasons. The Hornets were 48-34 during the 2015-16 season. That was the best record the franchise has had since rejoining the NBA as the Bobcats for the 2004-05 season. After being fired by the Hornets in 2018, Clifford coached the Orlando Magic for three years, making the playoffs twice. So, there’s a measure of success to draw from — but not much.

Clifford’s teams have never made it out of the first round of the playoffs. In fact, aside from a seven-game loss to the Miami Heat in the first round in 2016’s first round, his teams haven’t come close to winning a series. The Hornets were swept by the Heat in 2014 while the Magic lost in five to both the Toronto Raptors in 2019 and the Milwaukee Bucks in 2020. And while Charlotte did lead Miami 3-2 in that seven-game loss in 2016, three of the four losses were by double-digits and Game 7 was a 33-point loss.

Furthermore, while Clifford’s teams have made the playoffs in half of his seasons as an NBA coach, one of those teams had a losing record and another was 42-40. Overall, he has a 292-345 record as a coach. His teams have never won 50 games but have also never been bad enough to earn a high draft pick.

Going with a coach like Mike D’Antoni or a young assistant would have been easier to understand. Of course, it’s possible that Clifford could turn things around in Charlotte but his history doesn’t show that it’s all that likely. If nothing else, we can understand why so many NBA fans are left unimpressed by this hire.