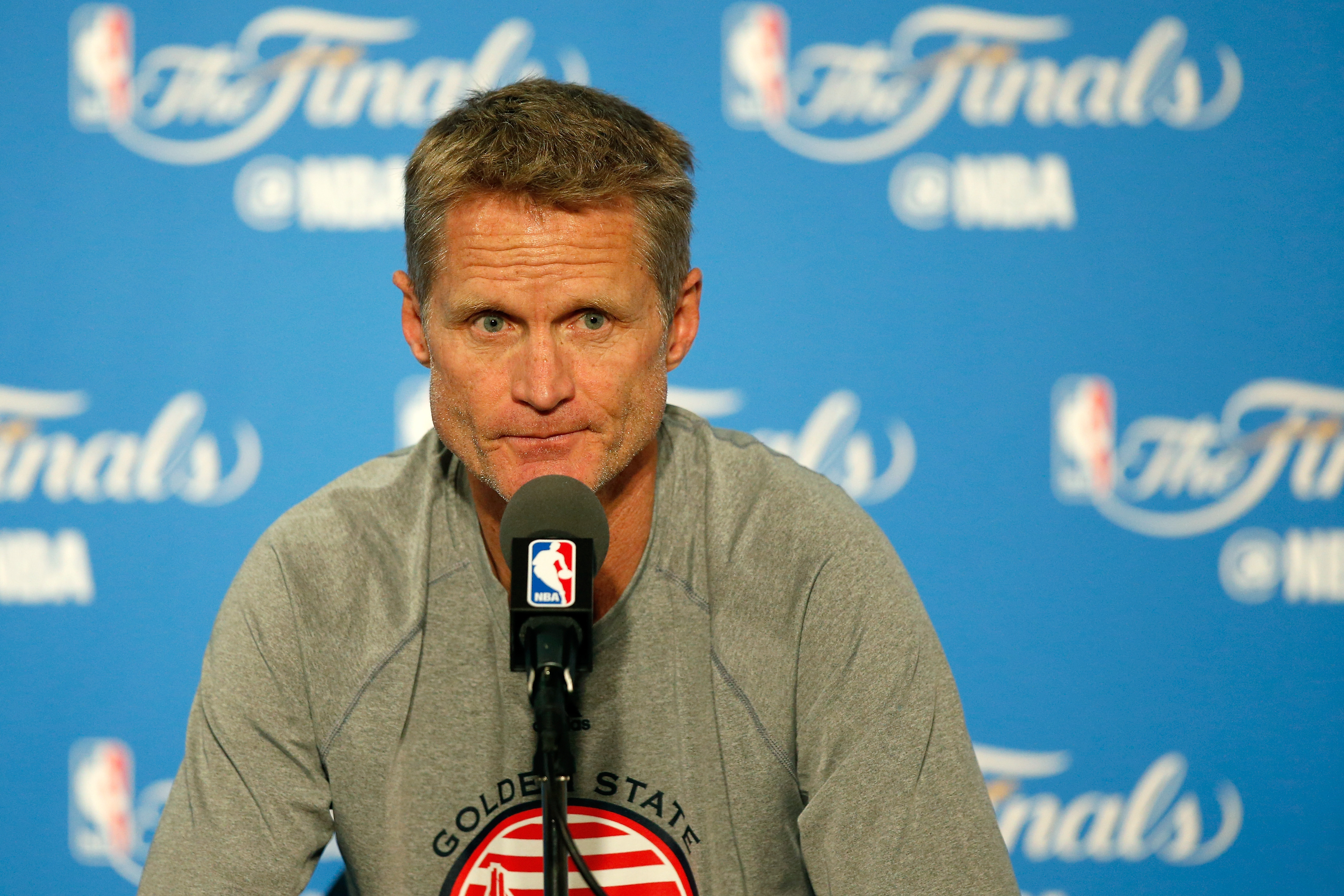 Steve Kerr recently appeared on The TK Show, a podcast hosted by Mercury News sports columnist Tim Kawakami to presumably talk about the fallout from the Golden State Warriors’ Game 7 loss in the NBA Finals to the Cleveland Cavaliers.

Much of the podcast was decidated to the usual topics. Kerr talked about the upcoming free agent period and the liklihood that some of the team’s players won’t be back. He mentioned that the team will announce the replacement for Luke Walton soon. He touched on how he’s looking forward to resting this offseason to deal with the effects of multiple back surgeries that still bother him.

Then Kerr asked if he could get political and launched into a passionate plea about gun control. Not only is it such a hot button issue right now but it’s an issue that touches Kerr personally as his father Malcolm was assassinated in 1984. He did not hold back.

“When 90 percent of our country wants background checks on gun purchases and we’ve got our senate and our house not only voting it down, but using the Bill Of Rights as a reason for people to have rights to carry these automatic weapons, and we’re getting people murdered every day at an alarming rate.

I just have to get this off my chest. Our government is insane. We are insane. And what bugs me is this adherence to the right to bear arms, you know. That was back in 1776. People didn’t own automatic rifles. You had to have a musket in case the Redcoats were coming. The British were coming. And the beautiful thing about the Constitution is they left open amendments to change things because things change over time.

I kind of think that our forefathers would not have ok’d automatic weapons to be sold to everybody if they existed back then. Let’s have some checks. It’s easier to get a gun than it is to get a driver’s license. It’s insane. And as somebody who’s had a family member shot and killed, it devastates me every time I read about this stuff— like what happened in Orlando— and then it’s even more devastating to see the government just cowing to the NRA and going to this totally outdated Bill Of Rights, right to bear arms. If you want to own a musket, fine, you know, but come on. The rest of the world thinks we’re insane. We are insane.

And until we vote these senators and congressmen and women out of office, the same thing’s gonna happen. And it’s infuriating and I had to get that off my chest.”

Kerr also touched on the recent Senate sit-in and the reaction to it.

I read a quote from a senator in North Carolina. I think his name was Mark Walker. And he said this sit-in is a disgrace to Woolworth’s. Woolworth’s is where the sit-ins occurred in the 60’s…”they were fighting for rights, now the sit-in is about taking away rights.” Think how disgusting that is. These people in the 60’s were fighting for actual human rights. Integration into schools and just human dignity. Being able to use the same bathroom. These were real civil rights. We’re really gonna call the right to buy an automatic weapon–actually not even that–we’re gonna call a rule that disallows people on the terrorist list to buy an automatic weapon…we’re calling those rights? To me that was one of the most disgusting things I’ve ever heard.”

Kerr ends with a thought that many have wondered about in recent days when they think about whether or not anything will change in terms of gun laws.

You wonder if any of these Senators and Congressmen and women who are so opposed to even holding a vote on not only the right to buy an automatic weapon but just the background checks and the lists and all the stuff, how would they feel about this if their own child, their own mother, their own father, sister, brother, wife, husband was murdered. Mass murdered. Would that change your mind? I don’t know but how many times do we have to go through this before our government actually does something about it?”

You can listen to the whole interview here or skip ahead to 30:00 mark to hear Kerr’s gun control comments.