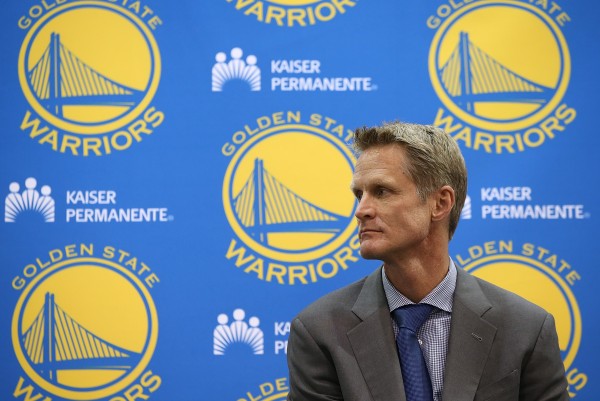 Colin Kaepernick’s protest of social injustices has started one of the most widespread discussions we’ve seen in some time.

Golden State Warriors head coach Steve Kerr was asked about Kaepernick’s protest, and what his stance is on the approach that Kaepernick has taken. Kerr was very real with reporters, and said that he and his team would be talking about the issues. He added that regardless of what side anybody is on, they should be disgusted with what is happening in the country.

Below a transcription from the Mercury News:

“I’ve talked to several of our guys about it. And I think we will absolutely talk about it as a team before our first game.

I’ve talked to some of the guys, just what do you think? What does it mean to you? I’ve kind of given them my opinion, we’ve shared thoughts.

It’s kind of the way we do things around here anyway. We like to talk about stuff, basketball or not.

And I think it’s probably one of the best things that’s come out of the Kaepernick issue, is that people are talking. It’s a good thing.

No matter what side of the spectrum you’re on, I would hope that every American is disgusted with what is going on around the country, what just happened in Tulsa two days ago, Terence Crutcher…

Doesn’t matter what side you’re on in the Kaepernick stuff, you’d better be disgusted with the things that are happening.

So I understand people who are offended by his stance–maybe they have a military family members who is offended or maybe they lost somebody in a war and that flag or the anthem means a lot more to them than someone else.

I think Colin has really clarified his message over the last couple weeks. I would think that something similar will happen in the NBA. And as I said, nobody has to be right, nobody has to be wrong. I would hope that everybody sort of respects each other’s point of view, there are valid points of view on both sides.

But as I said, I think Colin when he met with Nate Boyer, decided to kneel instead of sit, acknowledged his respect for the military and really clarified the message that what this is really about is unarmed black people being killed indiscriminately around the country… and then it happens again two days ago…

That’s the message. That’s what matters. And the other stuff, they can talk about all day, nobody’s right, nobody’s wrong. But that matters. And everybody should be trying to do something, whatever’s in their power, to help in that regard.”

There will undoubtedly be protests in the NBA this upcoming season. Warriors star guard Stephen Curry has said that he will not be kneeling during the national anthem himself, but that doesn’t mean a protest of some type will not be made at all. Kerr has been vocal in the past in regards to political issues as earlier this summer he was very vocal in making an impassioned plea for gun control.

For instance, Cleveland Cavaliers guard Iman Shumpert announced today that he would be donating time and money to foundations, as well as challenging others to do the same:

For each steal I’m going to donate money and time towards a foundation(s) striding to improve the struggle between the badge and the citizen. I challenge all sponsors and athletes to match these proceeds to contribute to the cause helping families affected by all the killings leaving families and communities traumatized. As big as an awareness Kap has raised by taking a knee and the bravery it took for so many to follow I also understand those that fought for that flag have nothing to do with whats going on in our society today and I no longer believe taking a knee is the answer. This news makes me sick and I am challenging myself to make a difference!