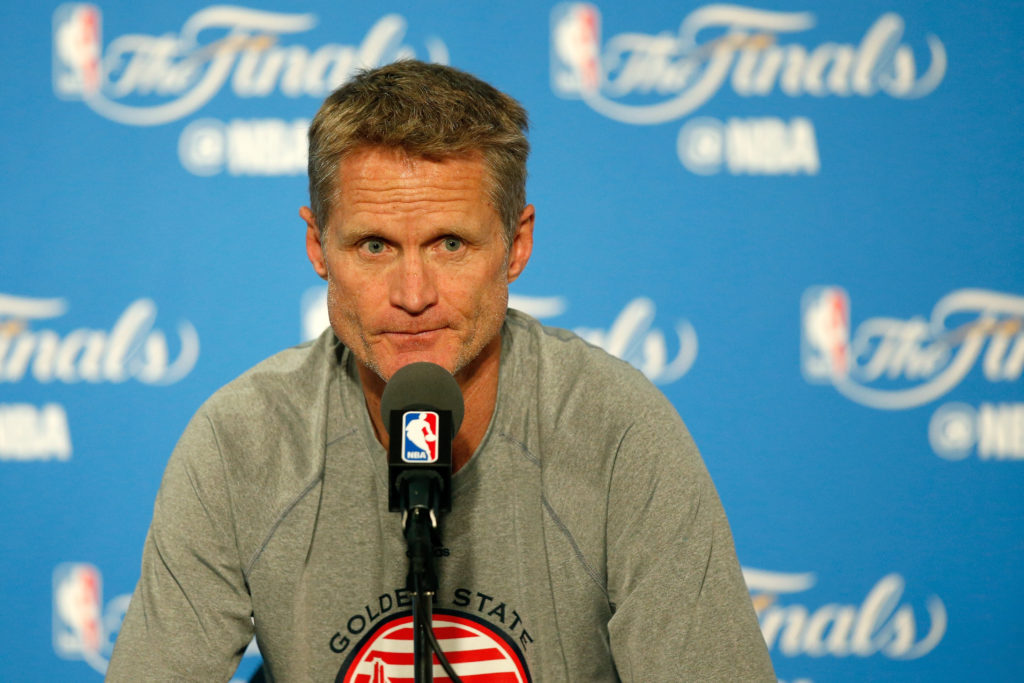 Just this week, two legendary NBA players Julius Erving and Magic Johnson came out and said their past Philadelphia 76ers and Los Angeles Lakers teams respectively could beat the Warriors.

Magic was even more specific, with the help of Pat Riley:

“We would probably sweep ’em,” Magic said. “They’re too small.”

“Try to put somebody on Kareem Abdul-Jabbar,” Riley added.

Naturally, with all of this coming out, someone felt the need to ask Golden State Head Coach Steve Kerr what he thinks and well, his answer was blunt and perfect.

Steve Kerr on all the former greats who said they'd beat this #Warriors team. #NBAFinals pic.twitter.com/5uxheYHQoX

The little bit of sarcasm with a dash of humor and sprinkle of seriousness makes this the perfect quote.

Of course, this really just brings up two great questions posed by our own Jay Rigdon:

He’s right. Would Magic and Erving and all the other past great teams beat the Warriors if Golden State traveled back and time or if the past great teams traveled to the present? Or would past teams beat the Warriors in both scenarios? We may never know, but here’s the thing, the game is different now than it was in the past so these arguments are pointless.

Back when Magic and Erving played, the three-pointer was either non-existent or brand new. This year’s Golden State squad obviously relies heavily on the three-pointer with guys like Steph Curry and Klay Thompson. So to compare the 2016-2017 Warriors to past teams is tough.

Someone like Steph Curry would still be able to play back in the 70s with guys like Erving, but his style of play would have to be very different. Curry couldn’t rely on three-pointers all the time and might have to be more physical.

On the other hand, if Erving and Magic traveled in time and brought their teams with them, would they be able to adapt to the modern style of basketball? Let’s look at three-pointers once again. During the 1988 NBA finals when the Lakers beat the Pistons 4-3, only three LA players made a three pointer: Magic, Byron Scott, and Michael Cooper. This year’s Western Conference champs have 7 different players who have made a three.

The style of play is so different across generations, so the debate of whether or not the Warriors would beat past teams is ridiculous. This year’s Golden State squad had so much success because their style of play along with their skill set easily makes them the best team in the NBA this year. At the same time, it also could’ve made them the worst team in the NBA in 1988, but we will never know if that’s the case.

So to echo our own Kevin Trahan…

“This is all dumb. The Bulls were fun and so are the Warriors. Just enjoy basketball.”