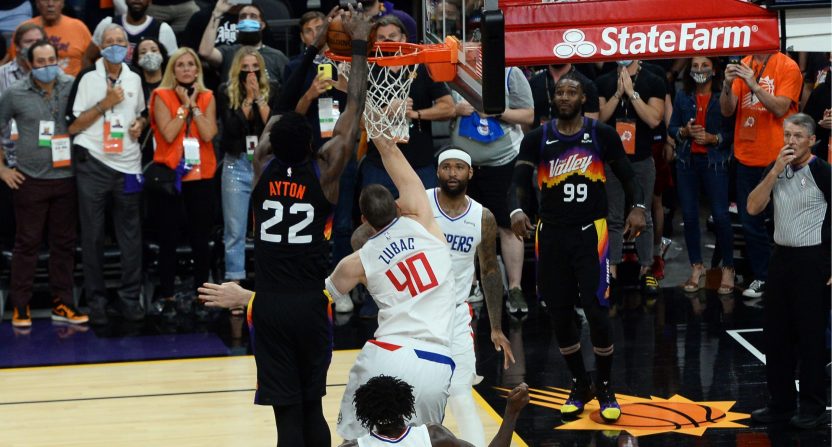 The Phoenix Suns outlasted the Los Angeles Clippers in a 104-103 Game 2 victory that featured a ridiculous final minute, and a particularly ridiculous game-winning play.

The Clippers took their first lead of the fourth quarter on a Paul George bucket with 30.9 seconds left, but Suns star Devin Booker quickly answered with a jumper to give the Suns the lead back with 27.0 seconds left.

Devin Booker goes for the 2-for-1 and gets the Suns the lead back. Wild finish in Phoenix! pic.twitter.com/ATozreoQ7r

Paul George answers and the Clippers take the lead! 🔥 pic.twitter.com/tFsTJl6AeR

However, after a Suns turnover, George was fouled and missed both free-throw attempts with 8.2 seconds remaining.

On the ensuing possession, Mikal Bridges missed a three-pointer, but replay — there were plenty of reviews in the final minutes — showed that the ball went off the Clippers.

The Suns got one more chance with 0.9 seconds left and perfectly executed an inbounds alley-oop play with Deandre Ayton throwing down the game-winning jam.

Edit: Officials are putting 0.7 seconds back on the clock.

And here are replays of the Deandre Ayton dunk: pic.twitter.com/KfFwk6zcLp

It appeared that the game was officially over, but officials put 0.7 seconds back on the clock after review. George was unable to get a shot off and the Suns locked up a win.

The last 90 seconds of the game took 33 real time minutes.

There were as many reviews (5) as field goals (5) in that span. pic.twitter.com/seEbxCoKFl

Ayton scored 24 points and Booker added 20 in the victory (to go with their crucial contributions in the final seconds), but the most impressive performance came from journeyman guard Cameron Payne.

Payne started at point guard with Chris Paul out — due to health-and-safety protocols — and scored a career-high 29 points with nine assists and zero turnovers.

Cam Payne is the best story in basketball, no other way to put it.

Failed lottery pick with OKC -> absolute disaster with the Bulls -> 10-day contracts -> out of the league -> signed in China -> balled out in the G League -> signed with Suns before 8-0 bubble run. Unbelievable.

The Clippers came oh so close to tying up the Western Conference Finals series, but instead the Suns take a commanding 2-0 series lead. Game 3 will be a must-win for the Clippers, and at least it will be in their home arena on Thursday night at Staples Center.