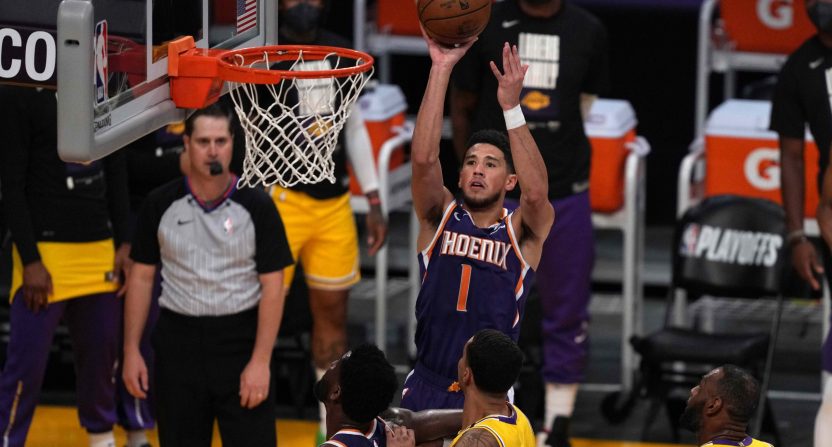 The NBA’s defending champions won’t make the second round of this season’s playoffs, and it’s the first time LeBron James (14-1) has ever lost in the first round of the playoffs. The Phoenix Suns beat the Los Angeles Lakers 113-100 in Game 6 on Thursday night at Staples Center to win the first-round series 4-2. It’s the first playoff series win for Phoenix since they advanced to the conference finals in the 2009-10 season.

Devin Booker lit up the Lakers’ defense for 47 points on 15-of-22 shooting from the field (8-of-10 on threes) and 9-of-9 at the charity stripe. The 24-year-old shooting guard also pulled down a game-high 11 rebounds.

The main storyline entering this game — aside from the Lakers on the verge of elimination, of course — was  Los Angeles superstar Anthony Davis playing despite a groin injury that forced him to miss Game 5. And after playing just five minutes (and clearly not looking right), he left Game 6 with the same injury.

Without a healthy Davis for Games 5 and 6 (and for only 19 minutes of Game 4), these of course weren’t the juggernaut Lakers we’re used to seeing.

Anthony Davis got hurt with 48 seconds left in the 1st half of Game 4.

From that point on the Suns outscored the Lakers by 50 (277-227), with Los Angeles leading for a little over 4 minutes in the last 10-plus quarters. pic.twitter.com/rzBBpxHKNK

But this series was still a very disappointing showing from the defending champions, who entered Game 6 as a three-point favorite.

For the Suns, what a performance- and they’re a very dangerous team in an up-for-grabs Western Conference. With the Lakers out, and the Los Angeles Clippers down 3-2 to the Dallas Mavericks, the Suns may have as much star power as anybody left in the West playoff bracket. And star power — to go with smarts and the veteran savvy from players like Chris Paul — can take you a long way in the NBA playoffs.

The Suns face the Denver Nuggets in the second round, in what should be a highly entertaining series. Game 1 is Monday night in Phoenix at 10:00 p.m. ET on TNT.