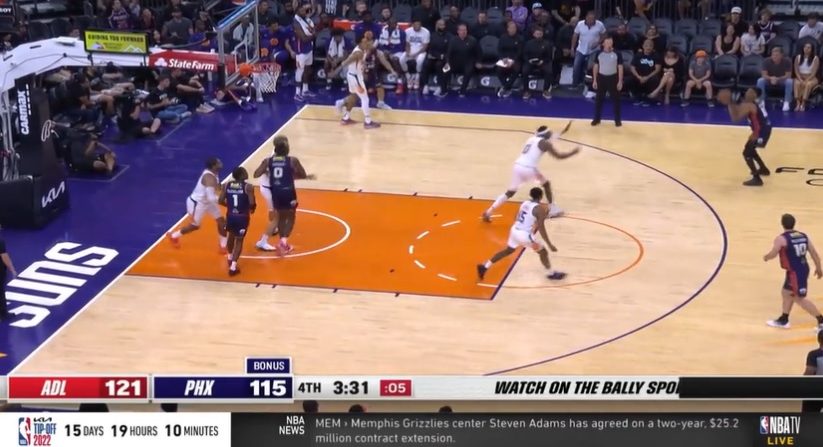 Since they were routed at home by the Dallas Mavericks in Game 7 of the Western Conference Semifinals in May, things haven’t exactly gone smoothly for the Phoenix Suns. A potential trade for Kevin Durant never came to fruition. Owner Robert Sarver was suspended for workplace misconduct and is now moving towards selling the team. Things didn’t get any better on Sunday.

The Suns took on the Adelaide 36ers, a team from Australia and New Zealand’s National Basketball League. It did not go well, with Phoenix losing 134-124.

Granted, it was a preseason game. So, it’s not on par with an embarrassing playoff loss, potentially losing out on one of the greatest players ever or an overall organizational upheaval. But it’s not good. The last time an NBA team lost to a non-NBA team was in 2015, when the Brooklyn Nets fell to Turkey’s Fenerbahçe S.K. Following the trail of the 2015-16 Nets is not a good idea.

Furthermore, Fenerbahçe S.K. was arguably Europe’s best team during the 2015-16 season. The 36ers, meanwhile, are coming off of a less-than-stellar campaign in the NBL.

The Suns just lost to the Pistons of the NBL pic.twitter.com/EiUgz6OIsw

Adelaide played at top form on Sunday, though. Two 36ers — Craig Randall II and Robert Franks — accounted for 67 total points and 15 three-pointers between them.

Naturally, the NBA world had a lot of fun at Phoenix’s expense.

How did Luka lose to this team 3 times. Need to reevaluate his legacy.

Congratulations to Luka Doncic, Craig Randall, and Robert Franks on becoming the new co-owners of the Phoenix Suns 👏🏽

Career averages against the Suns:

Has anything remotely good happened to the Suns’ franchise since Luka said this? https://t.co/Cy1NJFIGrb pic.twitter.com/H3CTNGirn6

It’s worth mentioning that while Phoenix’s top guys didn’t play the minutes they would in a regular season game, they didn’t just make a quick cameo and hit the bench for the rest of the night, either. All five starters — Chris Paul, Devin Booker, Deandre Ayton, Mikal Bridges and Cameron Johnson — logged 22 minutes.

Now, what does this loss mean? On its own, very little. If the Suns play close to the 64-18 pace that they played at a season ago, this loss will be nothing more than a humorous footnote, if we remember it at all.

But given the general negativity that’s hit the Suns this offseason, it’s hard to ignore a loss — even one that doesn’t count. And if things go awry for Phoenix during the season, this feels like the kind of thing that people will look back on and see as a warning sign that should have been followed more closely.