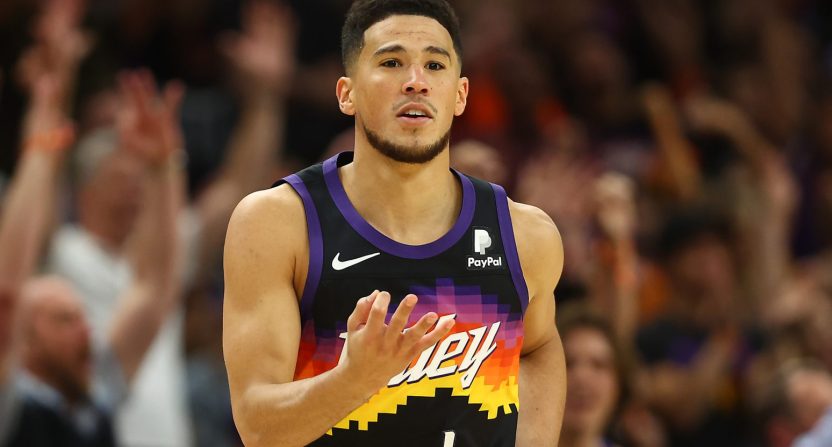 The two NBA postseason series played on Tuesday both saw the Game 1 loser even the series with a Game 2 win. Wednesday also featured two games and in both cases, the trailing team definitively did not tie the series.

In Wednesday’s first game, the Eastern Conference No. 1 seed, the Miami Heat, routed the Philadelphia 76ers to go up 2-0. The Phoenix Suns, the top seed in the Western Conference, did the same thing against the Dallas Mavericks.

Dallas actually held a halftime lead, going up 60-58 at halftime. But the second half belonged to Phoenix. The Suns outscored the Mavericks 31-23 in the third quarter, then put the game away with a dominant 40-26 fourth quarter to win 129-109.

Not done yet. Dallas here we come. pic.twitter.com/nNr1MEOlBT

The NBA world was left impressed by Phoenix’s Game 2 performance.

Damn this Suns team is really good. Don’t feel as bad watching CP and them cook someone else

You blink and the Suns are suddenly up 20 points. 😅

OMG @CP3 CHRIS PAUL just gets better & better with each game . The guy once again been the difference maker in the 4th quarter. He’s such a clutch PTPer at 36 & is absolutely amazing .One of my ALL TIME FAVORITES . He is key reason y @Suns broke game open vs @dallasmavs

Have the Suns missed a shot in the 4th quarter? This is crazy

Suns Strategy: Let Luka get tired with offensive orchestration in the first half, unmercifully attack him on defense in the second half.

Luka Doncic is a generational talent.

The problem is – the Suns have two of their own.

With due respect to Barkley Suns and D'Antoni Suns, this is best Suns team in their history

The series is not yet over, but the Suns absolute control of things.

Phoenix had the NBA’s best record during the regular season. Dallas will also have to win at least once on the road to win the series. Given that the Suns 32-9 record at home was the best in the NBA, that will be tough. Beating the Suns, in general, has been something the Mavericks have struggled to do for a long time.

The Mavericks haven’t beaten the Suns since November 29th, 2019.

To beat Phoenix, Dallas will need to give Luka Dončić help on both offense and defense. His 35 points led both teams on Wednesday but that was not nearly enough to win. That was partially because the Suns made attacking Dončić a primary part of their offensive game plan.

The Suns relentlessly hunting Luka Doncic. isn’t gonna be something that changes the rest of this series either. That’s bad news for the Mavericks.

That strategy went well for Phoenix. Devin Booker led the Suns with 30 points while Chris Paul had 28.

And if Dallas can’t find a way to limit the output of the Phoenix backcourt, this will not be a long series.