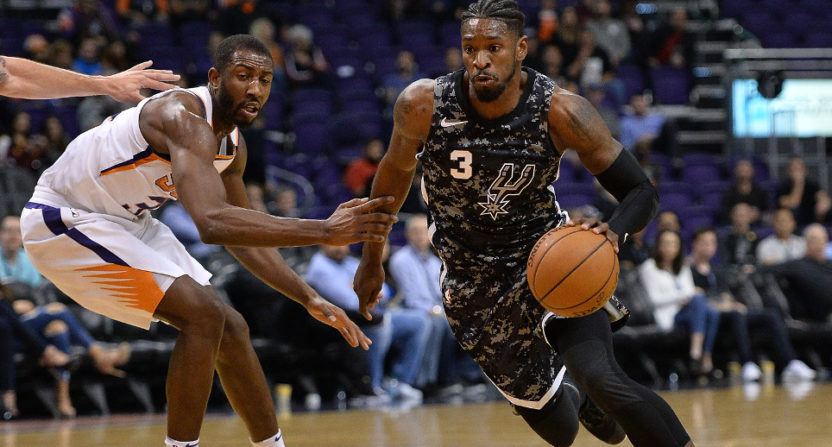 It has not been a good year for the Phoenix Suns. They entered Wednesday night’s home game against the San Antonio Spurs (which was nationally televised on ESPN for some reason) at 18-37, third from the bottom of the Western Conference, and they exited it with a 129-81 loss. That’s a 48-point margin of defeat, which tied their record for the worst loss in franchise history. Oh, and they set that record earlier this year in their season opener against the Portland Trail Blazers, and it was their third loss this season by 40 points or more:

They now own 3 of the 7 40-point losses across the league this year.

And it’s not like San Antonio was particularly pouring on the gas here. Their five starters only played a combined 106 minutes (an average of 21.2). Despite that, the Spurs led by 36 points at the half, the largest halftime lead in their team’s history, and they kept at least that lead for the whole second half, even extending it to 53 points at one moment during the fourth quarter. And San Antonio head coach Gregg Popovich even delegated the coaching down the stretch:

San Antonio assistant James Borrego is coaching the Spurs in the 4th qtr vs Suns. Pop can do that cause they're up 10,000 pts, but still cool to see. Borrego is calling timeouts, making subs, etc. Pop sitting w/ arms crossed on bench letting him rock. #Mentorship pic.twitter.com/Zz5KZMxJ5w

Oh, and Phoenix only avoided the single worst loss in team history thanks to a Danuel House alley-oop dunk with six seconds left, which cut the deficit from 50 to 48:

What an alley-oop by the Suns to avoid losing by 50 pic.twitter.com/LN2XMjv4y6

Of course, there were some other factors at play here. The Suns were without leading scorer Devin Booker, who missed his second straight game with a hip injury, and without center Tyson Chandler, out with a neck injury. And starting point guard Tyler Ulis left after just nine minutes played with back spasms. So they were quite shorthanded. But still, this wasn’t exactly a good effort; they only connected on 33 of 97 shots from the field (34 per cent) and only made three of 32 three-pointers (9.4 per cent). And they were pretty resoundingly lit up by Twitter:

It's actually good this game is on national TV. Now the world knows why, if you see a #Suns fan on the street, you should give them a hug. It could make all the difference.

I'm gonna learn you on how to watch Phoenix Suns basketball.

Put the game on. Mute. Start reading. Every chapter look up & see if the Suns are within single digits. If they are, watch. If not, keep reading.

You will be stunned at how many new books you've read at season's end.

I wanna know who sat back, kicked up their feet, and proclaimed to a conference room full of distracted suits that airing a Suns game on ESPN in early February was a good idea

Happy birthday @SteveNash! We hope it's a great one! pic.twitter.com/2iJWSg6xmm

Maybe they should bring him out of retirement.