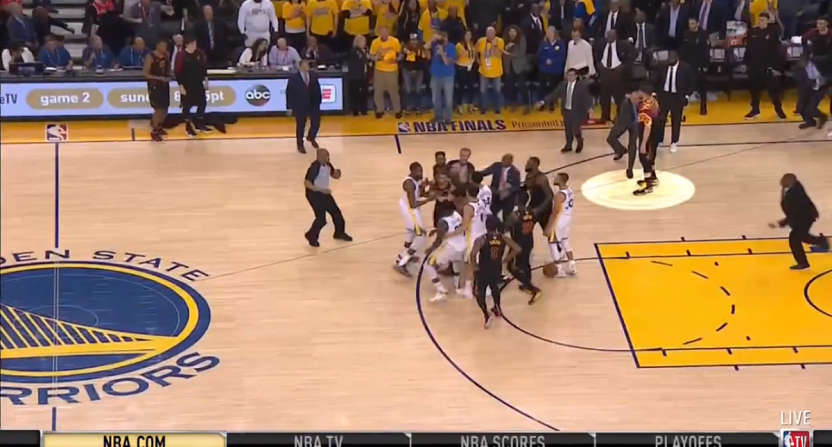 Near the end of overtime, Draymond Green did Draymond Green things and essentially incited a very minor scuffle with Tristan Thompson. No punches were thrown, though Thompson did shove Green’s face, but there were only a few seconds remaining, and it seemed like a standard nothing-to-it pull-apart situation.

Except for Kevin Love, who was already out of the game yet on the court before the scuffle broke out, and not just a foot or two over the sideline. He’s very much on the court here, and then gets pulled back to the bench as the relatively-more-intense part of the scuffle begins:

That’s pretty blatant! Love is all the way inside the arc, essentially at the free-throw line extended. Now, is his goal to get involved in a fight? No, probably not. It is just Kevin Love, after all. But he’s still wandering out onto the court for no real reason, given the circumstances.

Kevin Love told me he left the bench in OT to argue the call on Tristan, walking onto the court to get in the officials' eyeline, not in reaction to any scuffle & before it even broke out. Video (via @bballbreakdown) seems to back this up; not sure if it will matter to the league pic.twitter.com/JeHmd6Fl2p

The rule in question doesn’t seem to give much leeway for intent; rather, the leeway is in the proximity to the bench:

Here is the rule – "During an altercation, all players not participating in the game must remain in the immediate vicinity of their bench. Violators will be suspended, without pay, for a minimum of one game and fined up to $35,000."

There’s not much appetite for a suspension among just about anyone with an interest in the series; obviously Cleveland is fairly overmatched as it is, and without Love, LeBron would probably have to go for something like 60/20/20 for them to have a chance in Game 2.

Can we not do this? I wouldn't suspend Tristan either for connecting with Draymond's face. He meant to shove the ball at him, and the refs let Draymond taunt the world for 10 minutes. Let these guys play, please. https://t.co/UhpedRAI82

The NBA itself obviously has an interest in making games as watchable as possible, which means we could see an interpretation of the rule that ends up favorable to Love and the Cavs. But, at the same time: Kevin, what are you doing on the court there? The game isn’t over! It’s one thing to walk over to shake hands when someone is running out the clock, which Love was seemingly prepared to do when he initially stepped out into the corner. (Well, maybe not to shake hands.)

But to walk further onto the court during a dead ball, even with just a few seconds left? Toward a crowd of players that was pretty clearly headed toward a trademark NBA “altercation”? How does that happen? And how does Cleveland’s coaching staff let it happen? He just wanders right through like a toddler heading for a McDonald’s ball pit. That’s the same sort of poor bench control that sank the Suns in 2007.

Speaking as someone who just wants to have a pseudo-competitive Finals, though: please don’t suspend Kevin Love.